Yep, we’ve been sitting for quite a while.  After my last post, some of my readers have commented that I’ve been thinking too much about the future.  Guilty as charged.

At the same time, I’ve reminisced about some of the adventures I had during my Coast Guard career, and looking back at the thirty years, I ask myself: “How could I have been so lucky?”  After all, I got chances to go places, see things, meet people and have experiences that were just amazing.  Even after thirty years, it seems like it went entirely too fast.

Yet not every day was a slice of heaven.  For instance, I remember my very first day underway on my first sea duty assignment.  I had newly reported to the Coast Guard cutter Point Francis, an 82 foot long patrol boat. 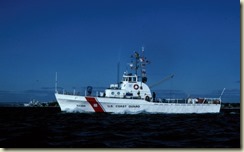 This class of cutter was constructed during the early to mid sixties, when I reported aboard, it was already twenty one years old, but in terrific shape, a testament to all the previous crews that lovingly maintained her.

I figured I was already a Salty Dog, after all I had been previously stationed at two shore side small boat stations and had been out in some pretty rough stuff and handled it like an old pro.

Was I ever in for a surprise.  The Point Class cutters were designed to handle extremely rough seas and as a result they rode hard.  Up-Down-Left-Right, repeat. For hours and days on end.  Even in flat, calm seas.  True rockin’ and rollin’.

We cast off our mooring lines on a beautiful, summer day from our home port at Sandy Hook, NJ (just outside of NYC harbor) and headed out for a two week long fisheries patrol up off of Cape Cod.

I stood out on deck and enjoyed the warm sun and the nice breeze that flowed over the deck.

Then…it happened.  First, a little flip in my stomach.  Then another flip, followed by a flop.  That progressed into a continual flip-flop and then waves of nausea started to flow over me.  The deep blue sea indeed looked blue, but I was starting to look green, very, very green.

No way was I going to loose my breakfast, after all, I was a…burp!  Salty..even more distasteful burp…Dog!

The Chief of the boat, Dan, saw my impending decent into sea sickness and came over to me to help.  “Don’t worry” he said.  “Sea sickness is nothing to be ashamed of.  It happens to the best of us”.

Well that certainly made me feel better.  Not!

Then he offered me some advice.  “Look out at the horizon, not at the waves, that will help your stomach settle down”.  I thanked him and turned my eyes to the horizon like laser beams.  I was determined to beat this sea sickness.

Up-Down-Left-Right, repeat.  I hung in there, I kept control of my stomach for what seemed like a lifetime, or two.  Actually, it was probably twenty minutes.

I thought I was doing better, so I decided to go down inside the cutter to the mess deck to get a drink.  I was getting thirsty, so I though some liquid would probably be good for my stomach.

Two mistakes.  Going down to the mess deck meant I could no longer see the horizon.  Plus there were smells down there (cooking food) that just didn’t help my stomach stay calm. It started flip-flopping like there was no tomorrow.

Tony, the cutter’s cook took one look at me and told me to lay down on the deck, it was a little more stable there and reduced the cutter’s motion.

In a flash, I was flat on my back on the steel deck, closed my eyes and tried the Lamaze breathing techniques that I learned when Marti gave birth to our kids.  Breathe in through the nose, blow lightly out the mouth…

It seemed to work a little, but my stomach now swirled as well as flip-flopped.  But I hung in there.

Chief Dan came down to the mess deck, stepped over me and went, to the refrigerator.  He pulled out a jar of one of his favorite snacks, dill pickled eggs.  Hard boiled eggs in a jar of dill pickle juice.  He stood over me and asked if I was doing okay.

I opened my eyes and looked up.  All I saw was the jar of pickled eggs he was holding in his hand as he looked down at me.  In the jar were the eggs and the little dill balls, and the dill balls were going round and around and around…

That did it.  I knew that a Mount St. Helens eruption from my stomach was on its way.  I sprang up and looked around, there was no way I was going to be able to make it back on deck, or to the head so I used, much to cook Tony’s consternation, the galley sink.  I heaved and heaved and then heaved some more.  When there was nothing left, I heaved again and again.

Finally the eruptions stopped.  I even felt a little better.  Then I heard Tony ranting at me for puking in “his” sink.  I told him not to worry, and I cleaned the sink and sanitized it with some bleach.

That was my first “Cookie Tossing” experience.  It was not my last, by a long shot.  I came to know and see everyone on the cutter lose their cookies, at times we even had “Community Pukes” , where several members of the crew would be losing their cookies over the rail at the same time.  In storms, everyone carried a couple of plastic bags in their pockets.  You used the bag, tied it off, pitched it in the trash and went about your business.  We fed a lot of fish on that cutter.

I learned some valuable lessons.  First, there were medications that helped me to overcome severe sea sickness.  I used them the entire two year tour on the Point Francis.  They help a lot, but I still tossed my cookies on and off.

There were some lessons on other medications that were not so helpful.  Like Alka Seltzer.  Tried that once.  That resulted in an eruption that was like Mount St. Helens, Mount Rainer and Mount Vesuvius blowing their tops at the same time.

There were foods that produced different results.  Rice Crispies were a no-no. When they came up, they would exit your mouth…and your nose!  Not fun.

Bananas are a two thumbs up food.  They won’t keep you from puking, but they absorb all the acid in your stomach.  So when they come up, it’s a smooth, almost delightful toss.

Despite all the sea sickness, my tour on the cutter was one of the best jobs I ever had.  But with my weak stomach, would I ever do it again?

Now I’d better get back to planning our next RV trip.

Posted by Paul and Marti Dahl at 5:24 PM