I spent an exciting morning on the phone.  Well, not really exciting, more like frustrating as I tired to nail down appointments for the Journey with local RV dealers.

The rub was with the inverter and the extended warranty company.  As I said yesterday, I can replace the unit myself, but the warranty company won’t pay for the part.  To better inform myself on a “Hail Mary” plan, if I couldn’t work out any appointments, what would it cost to buy the unit and eat the cost and install it myself?

I called my parts guy at Lichtsinn Motors in Forrest City, Iowa research the possible purchase.  What he told me was very interesting.  The inverter is no longer made.  No surprise, its high failure rate stopped Winnebago from using it in their motorhomes.

Fortunately, a direct, plug in replacement manufactured by a different company is now available and in stock.  For a mere $1280, plus tax and shipping.  Well, that “Hail Mary” idea is certainly on the back burner.

Next issue, I talked to an RV dealer who  would gladly make an appointment for me in three weeks, accept my extended warranty and told me to “just leave the motorhome and we’ll get to it”.  Um, that won’t work because we live in our Journey.

I eventually found another RV service center that would work with us on the issue, but cautioned that in their experience, extended warranty companies often required the failed inverters to be sent back to the factory to be tested to ensure they failed and then rebuilt if possible. If the unit cannot be rebuilt, a rebuilt unit will be substituted.

That evolution usually takes four to five weeks to turn around the part. That caused a couple of new questions in my mind.  One was is the manufacturer still in business?  Another was would a rebuilt unit last better than the original?  Then would the extended warranty company allow a replacement with the new brand of inverter that Winnebago now uses?

I called my warranty company and asked how they would handle the situation.  The rep stated that since it is such an expensive part, they probably would send an inspector to verify the failure first before authorizing anything.

After mulling over the information, I made an appointment with the  RV dealer that could look at the Journey first thing Thursday morning.  We’ll go from there, start a claim with the warranty company and see where it takes us.  The dealer can order the new, replacement inverter directly from Winnebago if the warranty company authorizes it.  If not, I may just have to decline a verification and rebuilding of my inverter and deal with it later, even if I have to bite the bullet and absorb the cost.  At least the unit is functioning on the battery charging mode, as long as I don’t turn on the inverter, I’m okay for the time being.

The question is:  Do I feel lucky?

I did have better luck on the broken tailpipe.  I will cut the jagged, broken end off several inches back to have a smooth end to work with. 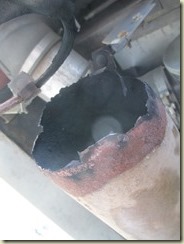 After trying several truck dealers, I found a hot rod shop that has the size exhaust pipe (4 1/2” outside diameter) in stock, but no way to expand one end to allow it to slide over the existing exhaust pipe. 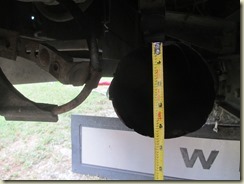 They recommended a special kind of band clamp, which I had them order and it will be in in a couple of days.

Then I found a custom pipe builder with whom I made and appointment for tomorrow morning to see if he can manufacture a pipe to slide over the existing exhaust pipe.  If so, I’ll have him make it, but I’ll still purchase the special clamp from the hot rod shop and keep it as a spare.  I’ve found when I have a spare part on hand, I’ll never have to use it.  Sort of an insurance policy.

So there it is, the fun and games that one can go through trying to get repairs done on the road as a fulltimer.  I just wish, as my friend Steve (Gone by RV) pointed out that in my August 27th blog post, I found my exhaust tail pipe a little shaky which led to discovering a broken clamp on the front of the muffler. 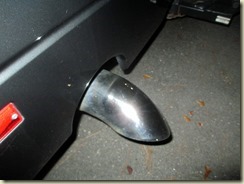 I should have inspected the entire exhaust system a little closer.  Just one of those armchair quarterback moments.  ;c)