No, we have not blown up from a leak in our propane tank.  I know I have not posted in a few days but we’ve been enjoying shows here in Branson, MO.  Unlike Vegas, where everything that happens there stays there, in Branson you can tell everyone what you did here.  With a clear conscience.

Among the shows we’ve seen, we like the musical variety show best put on by the Hughes Brothers, five brothers, their wives and all thirty two of their children perform in a two hour long program.  We’ve seen their show five times now and never tire of “It”. 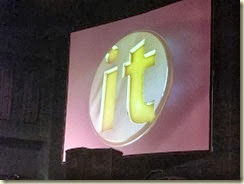 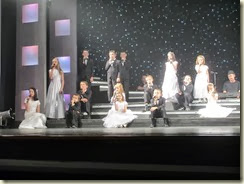 But I digress.  The last post had us narrowly avoid tragedy (or having to buy a new motorhome) caused by a leaky propane fitting on the Journey’s propane tank. 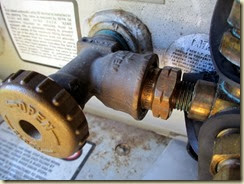 The interior of the Journey smelled of propane and we had to vent the inside to clear out the gas.  Thankfully, Marti’s nose picked up the smell because our LP detector did not sound.

The LP (propane) detector is mounted down next to the floor because propane is a heavy gas and sinks down. 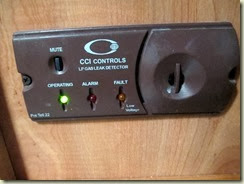 The green light on the unit indicates the detector is on and has power (12V) to it.  On some units there is a “Test” button to check if the unit is working.  Mine does not have it.

So how do you test it for proper operation?  Easy.

You use a butane lighter, click it on and hold the button down but not hard enough to light the flame. 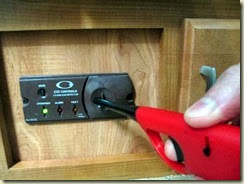 Put it near the detector and hold it there for a few seconds.  The detector should sound an alarm. 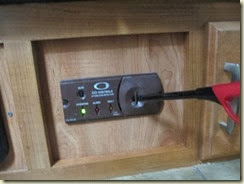 My detector did not sound the alarm, even after repeated tests.  It is defective and will have to be replaced.

I’m glad we found this out now, instead of in the middle of the night by waking up in mid air after the Journey blew up!  ;c)