It was time.  Time to leave Branson.  We decided we wanted to get an early start as we had about 850 miles to go to get to our workamping gig in South Carolina.  By Monday.

That gives us three whole days to get there, a huge amount of travel time for us.

We left at the crack of 10 am.  6 am didn’t look as inviting at 6 am as it did last night when I set the alarm clock to it.  Did I hit the SNOOZE button?  Heck no!  I hit the OFF button.  After all, I am respectfully retired and I want to make the most of it.

So we did sleep in a little longer.  And enjoyed every minute of it.

I needed it, too. Because last night we went to a show that took every fiber of my being, every last ounce of my strength, to sit through.  Unbeknownst to me and my bonnie bride, the show wasn’t the play we thought it would be.  Not by a long shot.  It turned out to be….

It was one of those times I’m glad my watch has a light up dial so I could see how many more minutes of suffering I had left to endure.  I’m sure I was suffering more than those guys hopping around on the stage in tights…

What show was it?  I’m not telling because they may have actually captured my face on their security cameras around the building.  I don’t  want to give Rick any ideas of hacking into the hard drives at the show and plastering my face all over the Internet where I can be laughed at in perpetuity.

Away we rolled.  The Journey ran well but we were faced with over 130 miles of steep, Ozark hills and curvy roads, decorated with struggling 18 wheelers that slowed us down even more.  And what would our travels be without the ubiquitous and ever present Headwind?

That distance would normally take us about two hours.  With the hills, the headwinds and the trucks, it took quite a bit over three hours.  Not a great start for a PDD driving day.

Once we conquered the hills, we ended up on some more normal highways in Arkansas where we just had to deal with the headwinds, the 18 wheelers blew right by us.  We just enjoyed the ride.

We called it a day and stopped at a Walmart in Fulton, MS.  420 miles down.  Not too shabby despite all the challenges.  We also got to see that we are not the only ones out on the highways enjoying life.  Check out these folks on this hog (Harley). 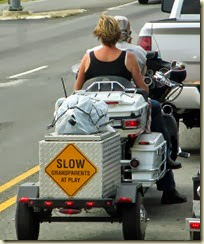