I looked out of our window this morning at a nearby trailer and saw a man standing in the doorway taking pictures of the Journey.  I originally thought he was taking pictures because he might have thought our Journey was pretty.

Later I realized he was taking pictures to prove there was a motorhome this big in this campground.

I’m not usually one to comment on campgrounds by name, but I have to call this one out.  Statts Mill RV Park in Ripley, WV.  Exit 132 on I-77.

Not big rig or even medium rig friendly.  That entrance problem I had yesterday was bad, but even turning the opposite direction is dangerous, there is a ditch that you have to be careful that your rear wheels don’t drop down into it.  Unless you have a Class B RV or a small trailer, I would not recommend this park because of the difficult, narrow entrance.

No wonder the only RVs in the Park were a few small trailers looking like long term residents.  In fairness to the park, it was clean and neat with some new playground equipment, we didn’t use the bathhouse, but it did look a little run down.

I decided, even though it is a bit of a pain, to remove the tow bar from the Journey to make sure I had enough clearance on the way out.  I brought it inside and laid it on the floor to give it a careful checking over. 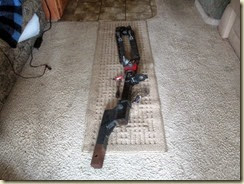 The only damage other than the cable hooks was a scrape mark on the bottom of the hitch, a solid block of steel.  A thorough inspection of the tow hitch didn’t reveal any damage or broken welds. 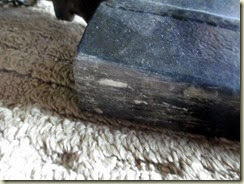 It was a good thing I removed it, because Marti told me after she followed me out that the tail end of the Journey almost dragged again, the exhaust tailpipe missing the ground my mere inches.

We set off to the right this time.  Another mistake.  It was 18 miles of turning, twisty, hilly, narrow country roads.  Marti went on ahead to warn oncoming cars that I was behind her. 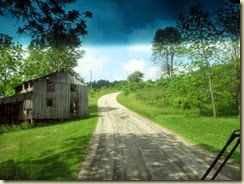 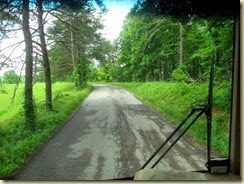 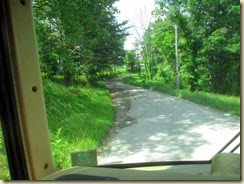 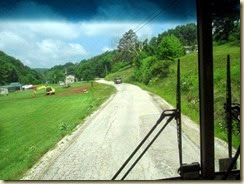 To test my driving skills even further, there was a one lane bridge with damaged and bent guard rails from big trucks catching them.  There were jagged edges sticking out several inches just waiting to cut into one of the Journey’s side compartments.

I inched across the bridge, watching the jagged guardrails like a hawk and just cleared them.  No pictures, my hands, eyes and mind were too busy.

Finally we reached the main road, hooked up the Element and were on our way.  We figured, not counting the cost of the damaged hooks and the years taken off my life by driving those back roads, we wasted about $16 worth of diesel fuel. Tonight, after driving 195 miles, we’re overnighting at a Flying J in VA.  Maybe my pulse will return to normal. ;c)

Posted by Paul and Marti Dahl at 4:43 PM