The Winds Smiled Upon Us!

Sooner or later it had to happen.  The thing we experienced only once before in South Dakota:  A Tailwind! 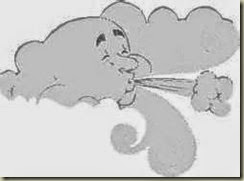 Not just a tailwind, a heavy, leaf blowing, dust hurling, awning ripping tailwind.  As an added bonus, we saw mpg figures that we’ve never seen before in our Journey:  10.2 mpg.  (If we could only get that mpg all the time!).  According to this article here, I’d estimate the winds were in excess of 30 mph by looking at flags. 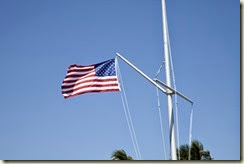 Just to clarify, we do consult our maps and have a good idea which way we are heading each day, but sometimes the GPS units have a slightly better idea (but not usually).  Ergo, they do get overruled most of the time.

Our units give us four choices: 1.)  Most Use of Highways, 2.) Least use of Highways, 3.) Fastest Time, 4.) Shortest Distance.  It would be nice to be able to set the units to a combination of all of them, but that requires way too much technical skill for me, I’m afraid if I tried something like that by setting points of interest, I’d overheat the unit and burn the Journey to the ground.

So we’ll keep the maps handy.

Along with moving by the breeze instead of against it, we encountered some new challenges:  Farm equipment. 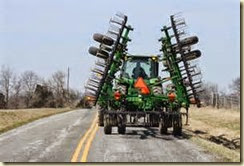 Seems to be planting season up here in Iowa.  We were slowed down by several tractors, sprayers and other food growing devices rolling down the roads.  Not an issue, they gave me a chance to do something we’ve never done before in the Journey.

We waited until we had long, clear straightaways…and we passed them!  Such an exhilarating feeling to pass something, instead of being passed, for a change.  Even if it was Old MacDonald on his ancient John Deere.  Hey, we take victories, not matter how small, whenever and wherever we find them.  :c) 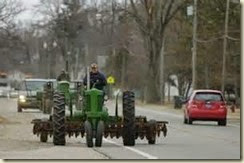 I have to apologize to Sherry, I blew it (no pun intended) and drove 237 miles today, we’re now only a hop, skip and a jump away from our Winnebago Factory Service Center.  I just couldn’t give up on driving with that glorious  tail wind.  Who knows how many years it will be before I get another one?  Sherry, I hope you understand…

We’re stopped for the night at a Flying J in Iowa.  We’ll be kicking back and watching a little TV.  Not much to see around us here, unless you want to sit and watch the corn grow…  ;c)

Thanks for visiting and feel free to  leave a comment.

Posted by Paul and Marti Dahl at 6:08 PM