We all checked in and got set up.  We have a nice, corner site close to all the others in the “Carolina Clan”. 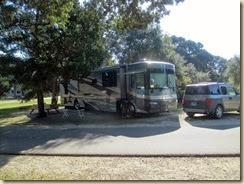 First order of business was finding firewood.  Can’t have any fun without a group campfire.  After a check of Craig’s list, Mike and I set off to a local firewood supplier.  He had some great wood for a very reasonable price. 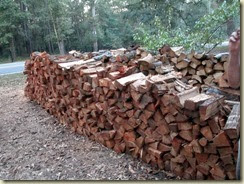 In no time, we had Mike’s truck loaded to the gills and we returned to start the fun. 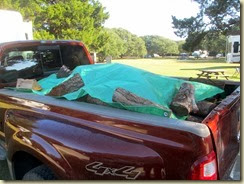 Today, (Tuesday) we had two items on the agenda, a swap meet where everyone brought an unneeded item and got a chance to give it away, or pick up an item they’d like to have.  George was the announcer doing his best to glamorize each and every item to make it seem irresistible. 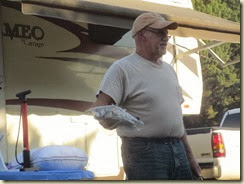 Why, Marti, did you have to pick that??? 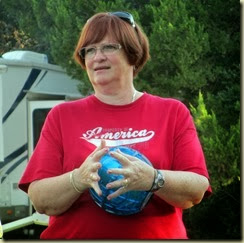 Terri told Mike all he could take from the swap meet was pictures, if he knew what was good for him.  “Yes, Dear”. 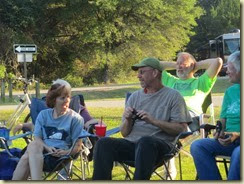 Our special surprise guests, Howard and Linda Payne from RV-Dreams joined in the fun.

We’ve all been to some of their excellent rallies, we invited them to our gathering so they could just kick back, relax and have some fun.

Howard was nice enough to show his Wilson Cell Phone Booster to some of the guys.  No, he was not doing a Statue of Liberty imitation. 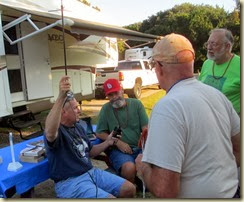 Finally, all the junk, er, lovely items were passed on to new owners and it was time to roast some weenies.  Seems like it brought the boy out in a lot of the guys. 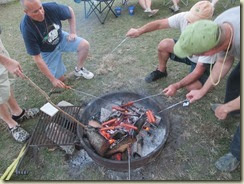 Laurie took lots of pictures of everyone cooking and eating. 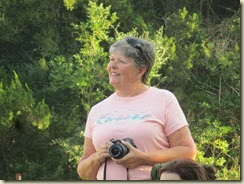 We filled up on the hotdogs and all kinds of dessert goodies, then sat around the fire enjoying its warmth and good conversation. 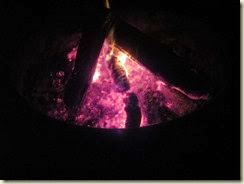 Good thing we’re going to go paddling our kayaks tomorrow to work off some of these extra calories!  :c)