Every year at Marti's facility, she encourages the staff to dress up in costumes on the last weekday before Halloween, and her staff really enjoys doing it.  She has a young lady, Brittany, who she hired right out of college (Virginia Tech) about a year and a half ago.  Great kid, she's become Marti's right hand and is now  training to become an administrator herself.

Last year, Brittany dressed up...as Marti!  It was hilarious, she went out a got a red hair wig, similar clothes that Marti wears and the final touch, a cup of sweet tea from a local fast food joint that Marti likes.

Well, paybacks are rough.  Marti waited all year to get even, and dress up...as Brittany.

Virgina Tech grads are very loyal to their school, around here it's not uncommon to see cars sporting V Tech stickers, license plates and other stuff.  The V Tech football team is called the "Hokies", something to do with a fighting turkey, if you can believe that.

Marti bought a lot of V Tech stuff, a tee shirt, a ball cap and a couple of other things.  She needed to get a blond hair wig because Brittany has short blond hair.  Unfortunately, we could only find a long hair blond wig.

Marti said we'd just have to cut the wig short.  We needed to use some kind of thing to put the wig on to cut it to the right length, we thought one of us should wear the wig and the other one could trim it.

I'm not allowed to play with sharp objects so that left Marti to do the trimming. 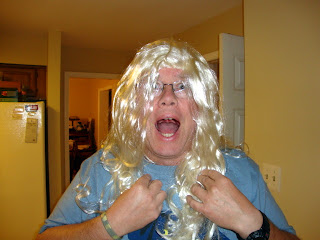 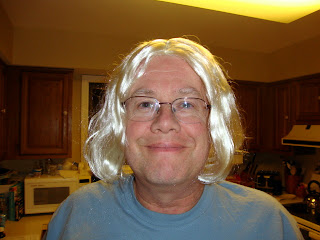 After
And for the finished product: 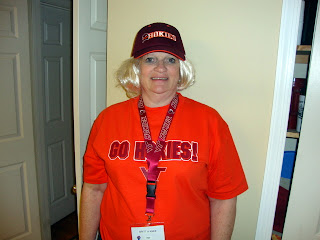 Brittany split a gut when she saw Marti all dressed up like her.  The costume was a success.  With the blond wig, some of Marti's staff didn't even recognize her.  Too funny!
I left work and hit the highway to head home and pick up the Journey.  I never got there, instead I sat for an hour and a half on I-95 for a traffic jam.  Never found out why there was a backup, but did see three other fender benders that occurred in the backup.  I decided to stop at the same place as yesterday and get another small soda. 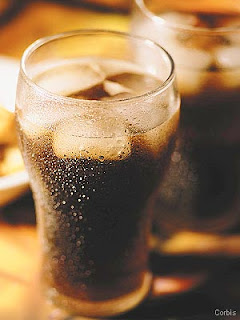 Today I paid full price ($1.09) instead of the Senior price ($.53).  The same girl, too.  I paid the full price and felt a whole lot better. ;c)
So we didn't get the Journey from the storage lot, it closes after dark so I'll zip over in the morning and get it and we'll head out.  As a consolation, we decided we'd eat out tonight and try a new Italian restaurant that opened nearby.  What a meal.  We heard they serve large portions, and it was the truth, we came home with three doggie bags!  Nope, Zoe the wonder dog ain't gettin' any of this. 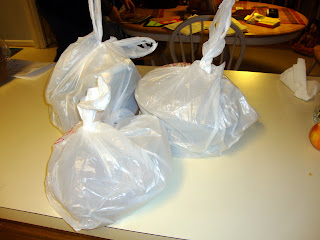