Last weekend I did the oil change on the Journey, I still have other things to take care of.  I do my required maintenance a little bit at a time and eventually get it all done.  Sometimes you run into the unexpected, like today.  I lifted the rear engine hatch and found the epoxy that Winnebago uses to attach many of the Journey's parts had failed.  I've been aware that this is a known issue so I've been keeping my eyes peeled.

Here you can see the metal frame has almost completely pulled off from the fiberglass.  If I hadn't found it, potentially it could have fallen into the radiator and punctured it.  I don't even want to guess what that might have cost...Phew! 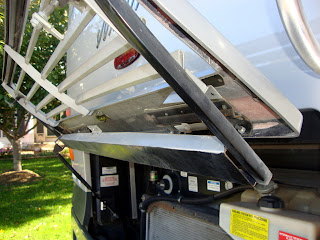 I ran to my nearby Lowe's (I'm getting to be on a first name basis with many of the staff) and picked up this. 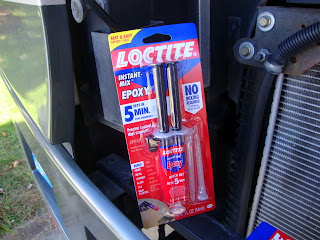 Easy to use, no mixing mess, just a point and squeeze operation where you want it.  I applied it liberally and then clamped the frame/fiberglass with clamps and let it dry. 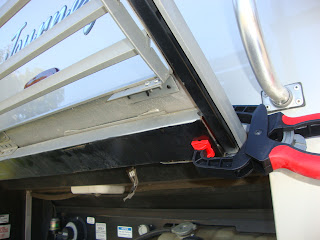 It worked really well.   I'm impressed and on my next trip to Lowe's I think I'll pick up some extras to keep on hand.
So with that out of the way, I started on what I really wanted to do:  Change the fuel filters on the Cat engine and lube the exhaust brake.  To get to the engine, you have to remove (it's more like wrestle) the top step in the  back bedroom. 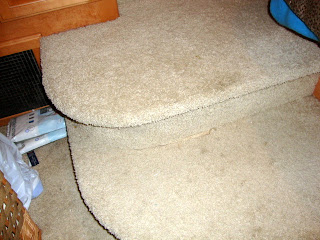 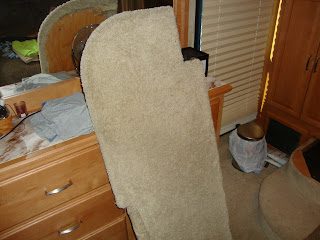 Under it is the metal engine cover access plate. 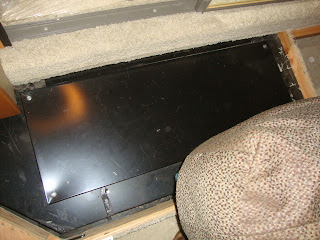 Four bolts hold it down, screw them out and there's the engine...boy it's dirty.  Note:  Put clean engine on the work list. 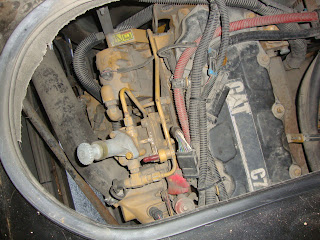 The filter is under the round, lite grey pump handle.  It looks just like an oil filter and screws on and off the same way...if you can reach it.  It came off after a fight, it's like bending over your bath tub, only it's twice as deep, to reach where it is. 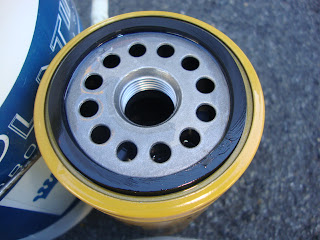 Some people prime the filter by pouring diesel fuel in it before installing.  Cat does not recommend that, in fact it has a warning right on the side of the filter.  The only thing you should do is lightly oil the gasket, like you see here and then screw it in place.  In the previous picture looking in the engine hatch, you saw the grey pump with the round handle.  I installed that last year, you unlock the pump and pump away, it takes about 60-70 strokes and the filter is filled and ready to go.  If you didn't have the pump, you'd have to fill it by cranking the engine for several minutes, not good.  Very hard on the starter and batteries.
Next I lubed the exhaust brake.  Diesels don't compression brake when you let off the accelerator like a gas engine does, so there are exhaust brakes that put back pressure on the engine and slow you down when you let off the gas pedal.  Helps save on very expensive brake jobs. 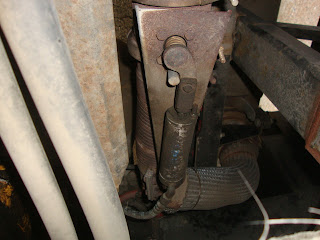 However the cylinder that engages the exhaust brake requires lubrication at least twice a year.  You have to use a special lubricant, which you can buy at Camping World or most diesel truck shops. 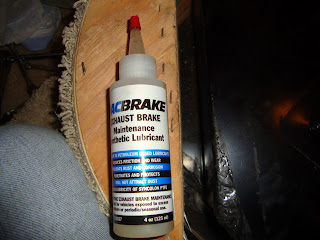 It is a high temperature lubricant specially made for exhaust brakes.  Other lubricates would just burn off because the exhaust brake is connected right into the exhaust system.  On the back of the bottle, it gives a diagram of where you should put the lubricant. 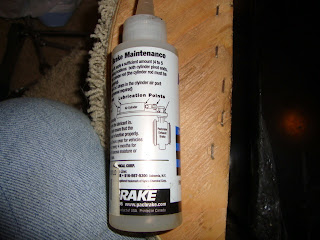 With the under the engine hatch work completed, I went back to wrestling the step cover in place.  I tried and tried and finally had to give up, figured I'd give it a try later.  I was running out of time because Marti was due home in about an hour and we planned on getting out in the Journey for the weekend, we missed last weekend.
I went outside to the back of the Journey to where the fuel filter/water separator is located and promptly broke my strap wrench.  Well, guess what's on the agenda for next week, after I go back to Lowe's and buy a new wrench.  Seeing a pattern here?
I really wanted to get away and we finally did, heading out to who knows where?  So we're stopped for the night at...a Walmart.  Tomorrow we'll head off and find a nice campground for the rest of the weekend.  I'd like a nice campfire.  In the mean time, Marti is happily playing on her Facebook page.  Note her cellphone on the arm of the couch right next to her.  Hopefully it doesn't ring. 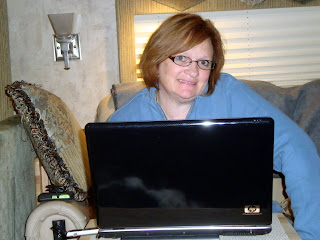 Oh yeah, I showed the step cover problem I was having to Marti and it slid right in.  Marti sure is my good luck charm!
Thanks for visiting and feel free to leave a comment.