With apologies to our RV Dreams buddy Sherry, who has a cute little rubber duck that rides on the dashboard of her motorhome, we went "Ducking" in Branson. 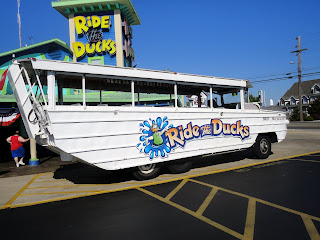 They have a fleet of converted World War II  amphibious "Ducks", (officially known as DUKWs in Army speak), that were used to transport supplies from ships to shore.  The conversion consists of stretching them, putting new engines and transmissions in, adding a roof and a bunch of seats from old school buses. 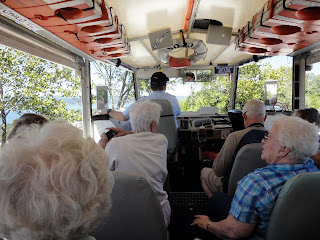 Those seats did nothing to assist my butt re-inflation.  The Duck ride goes around downtown Branson, then out into the woods and up on a mountain where the view of Table Rock Lake is incredible.  My Dad enjoyed looking out over the lake. 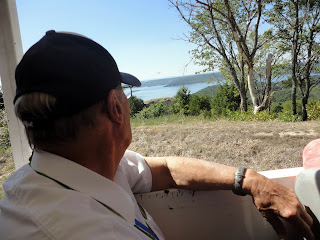 Of course, once we got underway, Marti and her sister Gail had to do their best duck imitation with these little plastic duckbill quacking devices everyone is issued when boarding.  The driver instructed all the passengers to quack at any other passing Duck, or golfer or police officers (oops, sorry Syl!).  Fortunately, no police personnel were harmed in the making of our Duck ride. 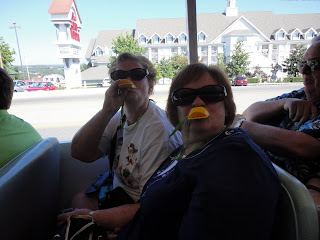 After the Duck ride, we went to see a show on the Branson Belle, an old fashioned paddle wheeler that cruises you around on Table Rock lake, while offering a dinner and a great show. 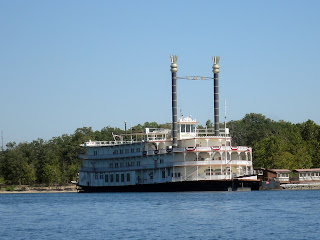 Inside is a huge dining area with a stage where the show is put on. 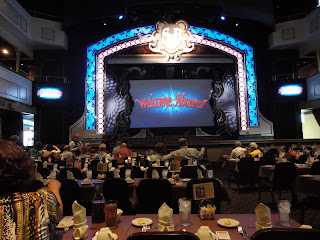 Along with great great singers, a fabulous band and a really talented magician, the star of the show was a young lady,  Janice Martin, that played the violin.  Not only was she the best violinist I've ever heard, she played Stairway to Heaven while hanging upside down in two silk drapes thirty feet in the air.
No pictures because that was not allowed, but I wouldn't have any because my dropped jaw would have gotten in the way.
So in answer to last post's question, what do you get when you put a male duck and a female duck together?
You get a baby duck! 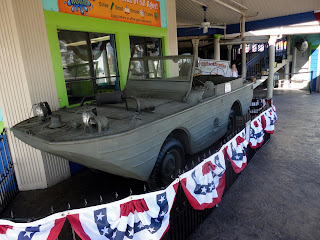 On display at the Branson Ducks pavillion is a "baby" Duck, a World War II amphibious Jeep.  This is a pretty rare vehicle and was very interesting to look at, at least for Dad and me.  Marti and Gail much more enjoyed looking at the gift shop...go figure!
Thanks for visiting and feel free to leave a comment.