Yep, it's that time again.  Tomorrow is the day I have been anxiously awaiting for (not). 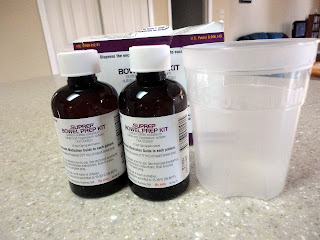 This time, I procured a different prescription for the pipe flushing.  It (so far) has been pretty easy to get down...and keep down.  I got some great advice from some of my blog readers on how to make the preparation part a bit more pleasant.  So I've stocked up. 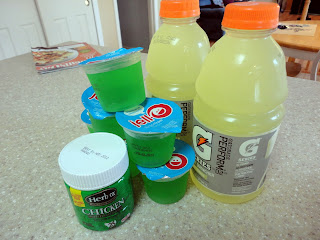 Since I have to fast all day today, green Jello and the chicken broth are all I'm allowed to eat. The Gatorade is to help wash down the prep liquid.  Nothing better than sitting in front of the TV and seeing food commercial after food commercial when you're hungry.
In between the juicy looking burgers and french fry commercials on TV, I ran out and did a couple of errands.
Yesterday, I spent several hours giving the Journey a well deserved washing.  I think I've removed most of the bugs from several of the states we passed through on our Branson trip.  I like to wash the Journey, it gives me great satisfaction to see it gleaming when it's done.
Afterwards, it was off to the storage lot.  When I got to the lot, I went to unhook the Element so I could back the Journey into its parking space.  As I pulled the tow bar pins, I noticed a steady drip coming from the back of the Journey's radiator area.  My first thought was that it was some leftover water dripping from the washing.  Just to be sure, I stuck my hand under the drip, collected a drop on my finger and tasted it.  It was not water, it was antifreeze, which tastes very much like my prep medicine.
Now it was an "All Stop Bell" (Nautical term meaning stop engines).  I crawled underneath the Journey to look for the antifreeze leak.  It didn't take long to find that the hose clamp on the lower radiator hose was loose and it was the source of the drip.  I took some tools from my tool box and tightened the clamp to stop the drip.  Of course, I did not have my camera with me. :c( 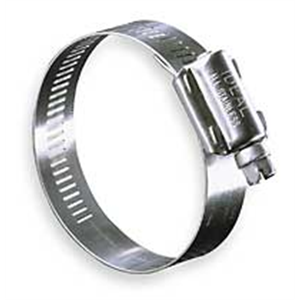 The clamp was an original factory clamp and it looked pretty cheesy, not unusual from vehicle manufacturers, it is common that they use lower quality clamps to save money.  I also could see why it was loose.  A couple of weeks back I had the engine antifreeze drained, the cooling system flushed and new antifreeze installed.  I'm sure the Freightliner mechanic that did the job loosened the clamp and pulled the hose away from the radiator to drain the system twice rather than use the tiny radiator drain plug.  The old "Time is Money" syndrome.
The cheesy clamp being loosened, tightened, loosened, tightened, then loosened and tightened again was more than it could take and it failed to hold tight.  I'm just glad it held tight enough to get me through the 2000 plus miles we drove on out Branson trip.
I checked the coolant level in the radiator tank and saw it was down quite a bit.  So today, I headed over to the Freightliner service center and talked to the service manager.  As I had already figured, he did not own up to the issue, so I just went over to the parts department and bought two gallons of antifreeze.  I had checked to see which antifreeze they had installed, there are two types and you can't mix them. Then it was off to Lowe's and spent a whopping $1.38 and bought a new, heavy duty hose clamp which I'm going to replace the original clamp with.  Yes, you know I bought a couple more clamps as spares.
I know that you can overheat a diesel engine by lugging it when going up steep hills, instead of downshifting to lower gears to keep the engine spinning faster and blowing more air through the radiator to keep the engine cool.  I was watching my temperature gauge religiously and it remained normal, so I don't think I lost too much coolant.
I'm glad I caught the leak, I'd hate to think of sitting on the side of the road with an overheated engine.
Now if I can just keep myself from overheating as I study for my procedure tomorrow, all will be well.  :c) 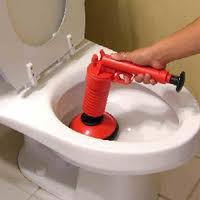