I was going to write about the "fun" we've been having with our Verizon MiFi, but something else more intersting took it's place, so that'll be for another post.

I guess sooner or later we were going to have our luck run out, and it finally happened.We ran into our first nasty camper this evening.  Here at the nice little gem of a campground where we're staying at, you are allowed to have campfires as long as you keep the fire in the site fire ring.  So we invited grandsons Andrew and Owie for a sleepover in Mimi and Pa's camper and we'd cook hot dogs and make smores over the fire. 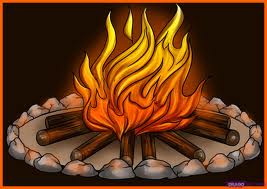 My next door (site) neighbor had a bit of a fit when I informed him that we were going to have a campfire in case he had some windows open, he might want to close them.  He told me no way could I have a campfire, he had replaced his slide topper on his fifth wheel last year and didn't want any holes burned in it from flying sparks.  He said that if I still wanted to have a fire, I'd have to go somewhere else.

Now to explain, even though the sites are not huge, there was about 20 feet between the Journey and the fiver, the fire ring being 15 feet away from the neighbor.

That's exactly what we did, we went somewhere else, to the campground manager.  She came over to our site and between us, we found a new location for the fire, moving it about ten feet further away from the original location.

She left and we started building a small fire.  In no time, the neighbor came flying out and said we had to stop making the fire, we had to move it further away.  At that point, I told him (nicely) that we had checked with the manager and she already okayed the moving of the fire to this new location.  He wasn't satisfied and went storming off to see the manager.

We had a nice little fire (three small logs) going when he came back and said the manager was coming down to talk to me and  tell me I had to ensure no sparks hit his awning or rubber roof.  I told him that we'd be very careful and would make sure no sparks flew.  He spun on his heel and stormed off to his trailer.

What I felt like saying was I had already moved the fire a few feet closer to my $225K motorhome and if I wasn't concerned about damaging it, then he shouldn't be concerned about his old, beat up, piece-o-crap fifth wheel.  I just bit my tongue instead and smiled.

A little later the campground manager came down with a big grin on her face and tried hard to suppress her laughter when I told her I had already been informed by the neighbor that  she was coming to tell me I had to make sure no sparks hit the fifth wheel.  She said she had quite the conversation with the gentleman, who angrily told her since he was a long time customer he had the right to demand I couldn't have a campfire.  She replied this was a campground, not a fancy RV resort and there have been campfires at my site for years in the previous fire ring location without any problems.

He got huffy and told her he was going to check over his trailer in the morning and if there was any damage he'd hold both of us responsible.  Sheesh!

But anyway, we had a nice little fire, no sparks went flying, the very slight breeze actually blew the smoke away from the neighbor and over the Journey.  The boys had a blast, cooked great hotdogs, loved the smores and went  to bed in the Journey full and happy.  Before we called it a night, I doused the few remaining embers with water to put the fire out cold.

I'm looking forward to seeing the neighbor get up on his roof tomorrow and look for "damage".  Bet he'll be even more happy when we have another campfire tomorrow night.  Yep, we've got more firewood.  ;c)

Posted by Paul and Marti Dahl at 9:30 PM