Back in my working past as a special agent, I was involved in a wide variety of criminal investigations. Drug smuggling, illegal alien human smuggling, environmental crimes and many others.  Often, these types of investigations had a common thread (besides bad guys).  They required hours and hours of surveillance.

On TV, the cop shows often have scenes of surveillance, usually the cops or detectives are sitting in a large, police type car right across the street from where the bads guys are.  They are drinking coffee and having a pleasant day out of the office.  In no time, the bad guys walk out and never see the cops and quickly find themselves in handcuffs.  Case solved.  Reality?  Not a chance.

Then there is the large thermos of coffee (or a large cup of Diet Coke).  That creates its own problems.  Remember, what goes in must come out.  Where do you find a bathroom when you need one?  Answer:  You don't.  That is what a large bottle is for.  You use the bottle...very carefully.

Then there is the technique called "Hiding in plain sight".   Use something that is so unusually normal that in plain sight it is invisible.  A taxi cab, a mail truck, or a pickup truck with a flashing yellow light on top and a couple of orange cones around it while you slowly strip the paint off a nearby fire hydrant.  If the surveillance takes long enough, you might even have time to give it a fresh coat of red paint...very slowly.  After all, you are simulating a city worker. ;c)

I was the proud owner of a new Four Winds Class C RV.  It had all the comforts of home.  Comfortable seats behind the front seats offering a clear view out the windshield.  A refrigerator for all those Diet Cokes.  A propane stove to heat some soup or stew, a propane furnace to keep warm with.  Best of all, a bathroom. 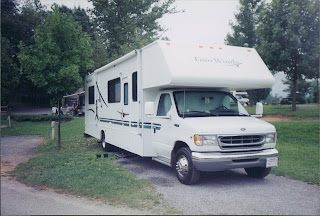 It was a cold October night.  We were conducting surveillance of a nightclub to ascertain its use as a drug distribution point.  We had identified some suspects and we needed to observe them going in and out of the nightclub selling drugs to customers that would drive up to the door.  We also needed to get photographs of the action.

Being that it was going to be a long night, it would require me and my surveillance team to be on this location for hours.  What did I do?  I drove my RV over to the nightclub in the afternoon, parked in the parking lot almost directly in front of the nightclub door and watched all the action that night from real comfort.

I was nice and toasty, when the temperature dropped, I turned up the heat.  Cooked some food on the stove.  Sitting in the dark behind the front seats, I was invisible to anyone looking in. I took all the pictures we needed.  Best of all I drank all the Diet Coke I wanted because I had my own handy bathroom, no bottles needed this time.  I almost felt bad for the other members of my team sitting around the nightclub in cars (he he).

Yes, it all worked out and we built a great case that led to many arrests and convictions.  I hid in plain sight and no one took any notice of me.

I only used my RV that one time, but you can bet there were many other surveillances when I wished I was using it.  Because the bottle was full... :cO

What out of the ordinary ways have you used your RV?