Why I Don't Fish

In our campground, there is a large pond, allegedly with large mouth bass, among the other wildlife that lives there, turtles, ducks and minnows.  The pond just calls a siren song to little boys with visions of catching a great big fish. 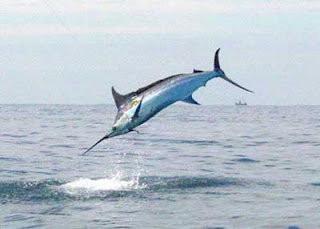 Our grandsons, being normal boys, couldn't wait to answer that siren's song.  Armed with fishing poles, they came to catch that elusive monster fish, Andrew with two fishing poles, an old one and a new one, still in its blister packed wrapping, and Owie, with a seriously professional Spider Man pole.

We walked down to the pond, boys, poles and various little boxes of lures, rubber worms, bobbers and of course, hooks, very sharp hooks.

Owie got the hang of casting his line very quickly.  The Spider Man pole shot the line out just like the real Spider Man cast his web. 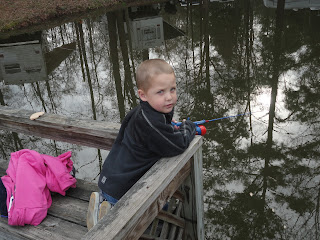 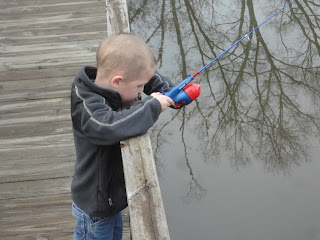 It turned out I was the one who needed to be patient.  About every fourth cast, the line tangled into knots on the end of his pole.  "Pa, my line is tangled!"
So I'd take the pole and wind the line this way and that way, keeping an eye on that sharp hook, until the line was freed and everything was back in working order.  Occasionally, I didn't keep as good a lookout on that hook as I should have and stuck the hook in in my hand, my thumb, my fingernail and pants.  Fortunately, the hook didn't go all the way in, it was just a bunch of small pricks that I felt later that night as I was in bed.
Andrew had a fancier rod.  It had none of the fancy Spider Man decorations on it, it was all business.  He worked on casting it just as well as his little brother could.  He was even demonstrating his talent to Marti. 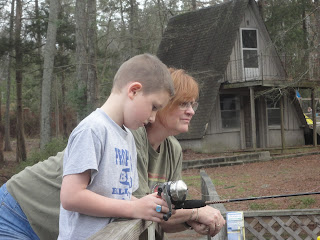 Just like his little brother, every couple of casts, the line would get tangled.  I'd barely get one boy's line freed up then I'd be working on the other's.  Finally, Andrew's reel got a bad tangle inside it and jammed.
I sat on the dock trying to see how the reel even worked before I could try to fix it.  When I was a kid, these fancy reels were beyond what I could afford.  My fishing gear was a stick with a line tied on it with a hook on the other end.  I didn't catch much.
I had to cut the tangle apart and open up the reel to see what was wrong.  While I struggled with this, Marti opened the blister packed rod and put it together.
I had to admit defeat on the reel and turned my "fishing talent" to the new pole.  The reel was a much better quality and after reading the directions, we figured how to cast with it.  Andrew got the hang of it quickly and began casting away.  Just like his little brother , he tangled the line every third for fourth cast.
My little pocket knife got a work out.  Sometime, the tangle was so bad, the only cure was to cut away the tangle and reattach the hook and bobber to a fresh piece of line. 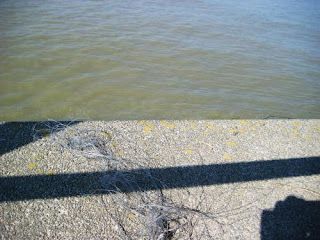 Owie decided not to fish from the dock, he and Marti went around the pond and he tried casting from the side.  He did pretty good, until he caught the line on a dead tree sticking out of the pond.  Marti lucked out and was able to pull it free.  Good thing, because no way was I going to wade out and pull the hook free.
Go figure, Andrew's new reel got tangled.  As I was working on that reel, Marti took a look at the other one and got it working...Saints be praised!  Good thing, because as I took Andrew's new reel apart, the knob that holds everything together slipped out of my hands, bounced once on the dock and plopped right into the water.  Now I owe Andrew a new reel.
He wasn't too upset because he was able to continue fishing with his other pole.  Phew!
And so the fishing went on, cast after tangle after cast after tangle.  Pretty soon my pocket was bulging with discarded, knotted fishing line that I had cut off to get the rods back in operation  (Didn't want the discarded line to end up in the water where it could fatally ensnare a duck or a turtle).
Finally we called it a day.  The score?  The boys - 0, the fish - laughing their tails off.  Mimi and Pa?  Exhausted, with Pa feeling like a pin cushion.
You just can't beat quality time spent with your grandsons.  :c)
Thanks for visiting and feel free to leave a comment.