With time on our hands, we've been "doing battle" with some small maintenance projects that get put off until they start making themselves known.

Our Journey is equipped with an In-Motion satellite dome that works very well, and is almost maintenance free.  It's great for keeping grandkids entertained with their favorite shows while driving down the highway with Mimi and Pa.  It has also come in very handy to have the Weather Channel on when driving the Midwest during tornado season or across the northern states during the winter.

Once and a while, though, it cries out for a little TLC.  Dirt and dust can be its enemy. 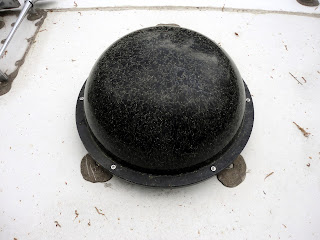 The TV picture gets distorted and it becomes very obvious that another type of journey must begin, up the ladder to the roof with rags and some spray cleaner. 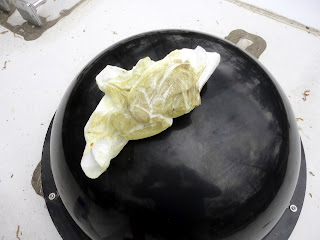 After getting it clean and shiny, I applied a light coat of water repellent, it dulls the dome surface slightly, but it sheds water quickly, giving a longer time in between cleanings. 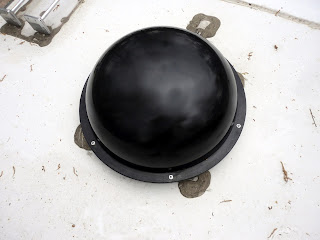 Now I have to do battle with the rest of the roof and slide awnings, but that battle will wait for another day...hopefully warmer. 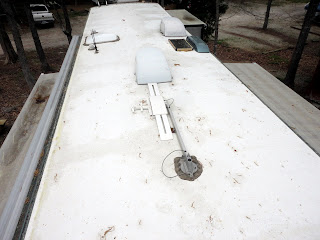 Marti has been fighting her own battle.  In an effort to make our full time life feel like home, she brought out the picnic table cloth and patio mat.  We've been moving so much up 'till now, we never were in one place long enough to bother.  Now that we're in New Jersey for the month of April, we dug all the stuff out.

And this battle started.  Since the FamCamp here has a double wide cement pad, there is no place to anchor the patio rug down.  Not to forget the picnic tablecloth has weights on it that haven't done their job.

The wind has been blowing so strongly that everything gets blown around.  Every morning Marti gets up and puts everything back in place, even using weights to hold things down.  In no time, things are back to the way the wind wants it. 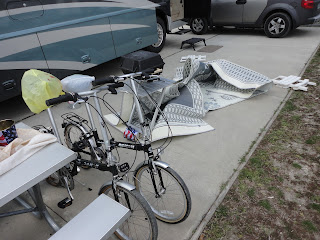 These are battles but the how can we complain?  After real battles of working for a living, this is just some comic relief.  :c)

Now for a question:  Can a grandma give a grandchild too many kisses? 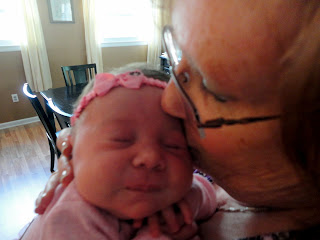 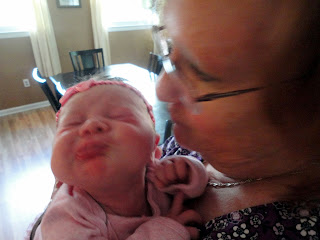