Today’s modern Coast Guard has a proud heritage.  In the past, with wooden sailing ships, when they got into trouble,  mariners had little hope of rescue.  To combat these tragedies, the U.S. Life Saving Service was born.

On Sandy Hook, NJ, part of the Gateway National Recreation Area, there remains one of the original lifesaving stations, built in the late 1800s. 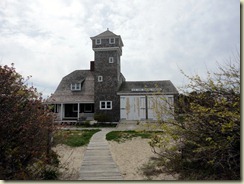 These stations were all along the coasts, about ten miles apart.  They were manned by men who dedicated their lives to saving mariners in distress.  They didn’t have fancy equipment, the biggest asset they had was strong muscles and and huge dose of bravery.

When a sailing ship wrecked off shore, there was no way the sailors and passengers could get to shore, the wind and the waves were deadly.  The Life Saving Service often rowed boats out to the wrecks and took off the survivors.

Sometimes the storms were so bad that the rescuers couldn’t use their lifeboats.  A new solution was developed, the Lyle Gun. 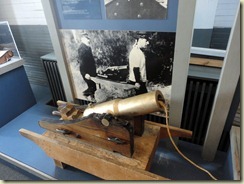 This small cannon was carried down to the beach, either by hand or on a beach rescue cart, all man powered. 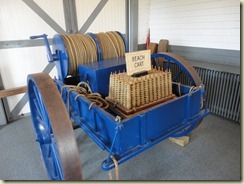 The Lyle Gun shot a projectile that was attached to several hundred feet of line. 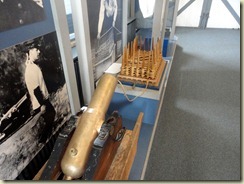 The technique was to shoot the projectile, with the line trailing along behind it into the wrecked ships mast. 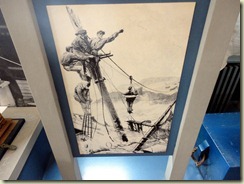 Then additional lines were pulled over and attached to the breeches buoy.  Survivors would hop into these breeches and be pulled, one at a time to safety. 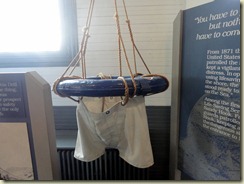 As terrifying as this must have been, it was slow and with the danger of hypothermia, an new device was developed to pull up to four people off the wreck at a time, the Rescue Car. It almost makes me embarrassed to show pictures of equipment that was used during my Coast Guard service years.  Here is the LARC, an amphibious vehicle that was used in low lying areas devastated by the flooding ocean around Sandy Hook. 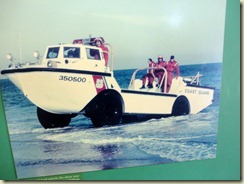 Here is a 41 foot Utility Boat of the type that I ran on many rescues. 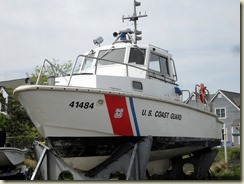 Both of these have been retired after years of faithful service.  The LARC was built in the mid sixties and the 41’ UTB was a product of the early to mid seventies.  The nation got its monies worth out of these pieces of equipment.  They have been replaced by new more capable craft.

Some pieces of equipment are irreplaceable.  The Sandy Hook Lighthouse, built in 1764 still remains on duty, its light shining to guide mariners safely into New York Harbor. 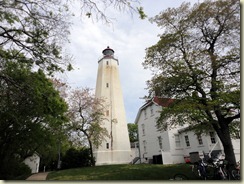 We had a nice day visiting Sandy Hook, where we lived for eleven years.  We have more to post about, but that’s for another day.

Posted by Paul and Marti Dahl at 9:53 PM