It was quite a storm and for once, the weatherman got it right.  Where we are, just a couple of miles inland from the Jersey shore, we braced for it.

We're very used to Nor'easters, we lived right on the Jersey shore for 11 years and saw our fair share of high winds and flooding, breaking surf.  Sandy Hook, NJ was where our home was.  The Coast Guard base was located right at the tip of a seven mile long peninsula pointing to the entrance of New York Harbor.

We survived the "Perfect Storm" back in 1992, and made it through an even more severe storm in November 1992, know as the "Unnamed Storm" which left us stranded on the Hook for over a week with no heat, no water and no food.  The road in to the base was buried for more than five miles under seven feet of sand washed up off the beaches by the waves.

All the families pooled our resources and we took shelter in a couple of homes where the electrician mates were able to hook some gas powered welding machines into the house's electric circuits to get the furnaces to run.  Meals we took at the Coast Guard station building because it had an emergency diesel generator.   Heavy equipment took most of the week to dig out the road, then the power company was able to follow in and replace all the downed telephone poles and restring the wires.

I spent a good part of the week after the storm manning a security checkpoint with some Park Rangers to prevent sightseers and looters out of the nearby communities that were devastated by the storm.  I was never so cold in all my life.

When we heard the weather forecast, we were ready.  My diesel tank is almost full so we'd have the generator for power (and heat).  I was ready to pull in the slides to protect the awnings.  We didn't worry about any flooding, if the water reached to where we were, it would be time to start looking for an Ark.

The rain came, it really pounded on the roof.  Maybe it washed some of the dirt off it?  I don't like to climb up there and scrub it down any more than I have to.

The winds picked up, but we didn't feel too much rocking and it never got so strong that I had to pull in the slides.  The biggest problem we had was needing to turn the volume up on the TV so we could hear it over the pounding rain.

The rain stopped later in the evening, the wind died down and we went to bed, dry, comfy and well.

This morning I got up and looked around outside the Journey to see if there was any damage.  Of course, Marti's patio rug was in a heap.  The only casualty was our BBQ grill was blown over off its table and broke off the fitting for the little propane bottle, irreparable.  The grill was old and probably was only going to last maybe another year, so it's not a great loss.

Not much of a storm for us, we're glad it's over and we're back to normal.  It is great peace of mind to be self contained in our wheeled home.  Just another "bennie" of the full time life.  :c)

Of course, the picture of the day of little Anabelle.  Her parents are turning her into a punk rocker! 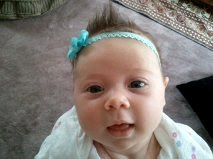 Posted by Paul and Marti Dahl at 8:54 PM