As Paul posted earlier, we just dropped off our RV for our SIL (son-in-law) to use for the next couple of months, while he is in training with his new job.  I guess this is a hot topic among RV-ers, lending out the rig, but it wasn't a hard decision for us.  Brian is a wonderful SIL, had a need - we had a solution - what's so hard? The RV is a THING, Brian is family (and I thank God he is part of ours!).  Anyway, I digress, as I really wanted to post about getting a taste of full timing - we had a smidge of a taste.... but it was oh so good! 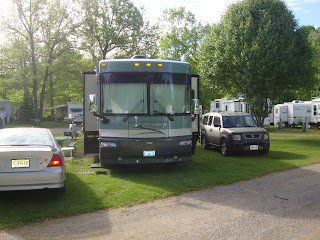 I know that for those that are truly full timing, it may not be possible to see how we can glean so much from so little, but when we still work full time, working LONG hours... hey a trip (to anywhere) is such a bonus.

Leaving after a full day's work on Friday, still was such a plus and FUN.  Driving with a destination, but no time frame (ok, comparable to a work time frame with the gotta-be-there-by-9am and conference-call-at-2pm or the report-due-by-COB) - not needing to be there til SOMETIME the next day was heavenly!

Hitting the road, even if it was after 7pm, driving west, watching the sunset, destressing and reconnecting with Paul.. like I said, heavenly!  Even finding a place to overnight (stop late, leave early) was adventurous - the promised Super Walmart (from the handy book The Next Exit) was hidden on a mountain attached to a mall!  (yes, I know - this is another hot RV topic: trust me - we spend more $$ in the Walmart while we are there, than it would cost for a campground - we just kill 2 birds with one stone: shopping and sleeping!).

Heading out the next morning, after our shopping trip - and grabbing breakfast in the McD's inside - was pure joy!  The sun was shining, the views beautiful and no time frame!  woo hoo! 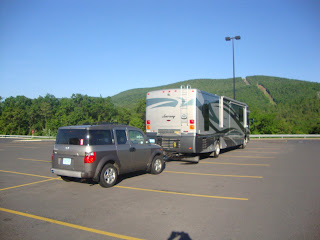 It was during this trip we found out our dog is camera shy - a kind way of saying she is terrified of the camera's flash.  Note the post Paul made, with Zoe's 'behind' in most pictures, thanks to the digital delay and her fear; thus she ended up squeezed behind Paul's driver seat, shaking and hiding - I gave up!  Even so, that was fun!  Hey, we were on the road, good weather and a (ok, I'll concede) loose time frame.  We did, after all, need to meet Brian and give him the low down on living in the RV for a couple of months later that day.

It was during this trip, that we had yet another glimpse of things to come, a taste of the freedom of retirement and full timing... it is on trips like this, as we talk about our plans to retire and full-time, that we shorten our time frame, and become more convinced this was what we want to do - no time frames (unless we want them), more time to spend with the grandkids/kids/family and just time to stop, smell the flowers (sorry, I am not a fan of a rose's smell), and enjoy. the. life.   *sigh*  That time is approaching, and Lord willing, it will be sooner rather than later.

Posted by Paul and Marti Dahl at 6:02 PM