Once in a while, we actually take a break from our grandkids and do something different.  Like visit our youngest son, Corey and his wife Amanda.  They live up in NJ and just married last year. 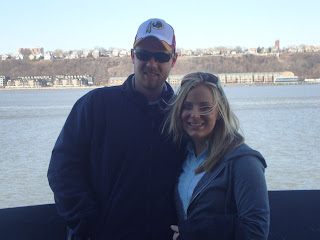 Sometimes it takes a bit of schedule juggling to see them, but we finally booked a trip with them to NYC where we visited the USS Intrepid Air and Space Museum. 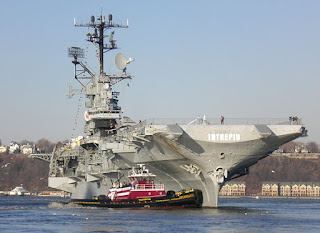 The USS Intrepid is a World War II era aircraft carrier that had a long and illustrious career that started with fighting in the Pacific Theater of WWII and lasted well into the Space Age.  After she was decommissioned, she was eventually brought to NYC and became a huge attraction on the Hudson River.
We walked all around the ship, I had not been on board her since the mid-1980's when Corey was just a blond headed toddler.  I have a picture some where of him manning a gun tub as a child.  I couldn't resist taking a picture of Corey some 24 years later in the same gun, he fit in it better this time. 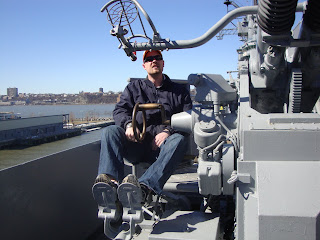 We toured the inside of the ship's hanger deck and enjoyed all the exhibits there.  We made our way up into the island all the way to the bridge where there was a good view of the city and the flight deck. 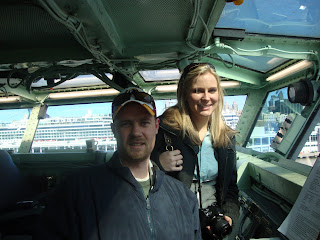 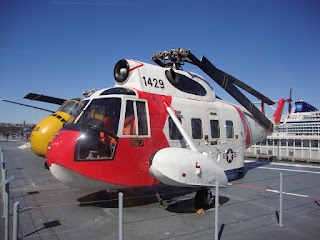 It was a U. S. Coast Guard Sikorsky HH-52 helicopter that at one time belonged to the Coast Guard Air Station at Brooklyn, NY.  I saw the aircraft number and realized that during my Coast Guard career, I had trained, worked with and flew on this very helicopter!  And it is now on display in a museum!
Now I feel really OLD!  I'm still on active duty with the Coast Guard, but when I retire, are they going to put me in a museum too?  ;c)
Thanks for visiting and please feel free to leave a comment.
Posted by Paul and Marti Dahl at 8:37 PM