My grandfather passed away 33 years ago.  He was 92 at that time and lived a full life.  He was a kindly man who spent his retirement years painting pictures.  He was already 70 when I was born.  He was in my life but I didn't know who he really was.

I had heard my mom once talking about my grandfather's military service.  She said he was a machine gunner in the English Army in the first World War and had been hospitalized for Trench Foot.  That was all I ever heard about it.

My grandfather was born in Southend-on-Sea in England in 1885.  He grew up in a family that had much artistic ability.  He came to the United States in 1912, evidently planning to stay.  In the following years, he traveled around the U.S. and Canada, that must be where I get my wanderlust to travel in our RV. ;c)

A couple of years ago I decided to look into how he was involved in WWI.  I found out many things, but not the whole story.

When the war broke out in 1914, my grandfather was still here in the U.S. and I'm sure was following things closely.  In late 1916 or early 1917, at age 32, he returned to England and enlisted in the Army.  The branch he chose was the Machine Gun Corps (MGC).

From my research, I was shocked to find that then men in the MGC were known as "Suicide Jockeys" because they were the first to be targeted by attacking German troops.  The machine gunners could do the most damage to the enemy and had to be eliminated as quickly as possible.  The MGC had some of the highest casualty rates as any branch of the English Army.  To be a member of the MGC, the soldier had to be of the highest physical and mental ability.

This was my grandfather, quiet and reserved.  I never knew he possessed those qualities.

My research into his military record hit a dead end.  In World War II, during the German bombing "Blitz" on London, the record repository where English military records were stored was destroyed and with it about 90% of the WWI files, my grandfather's included.

I hired a researcher in England to look into things and from shreds of records and official war diaries and casualty roles, I tracked down a basic outline of his service.  He trained in the MGC and deployed to France in November 1917.  He probably fought during some of the fiercest battles, in either Ypres, or the Somme. The fact that he had suffered from Trench Foot showed that he spent prolonged periods of time standing in water in the horrible trenches where soldiers from both sides lived, fought and too often died.

He was awarded two medals: 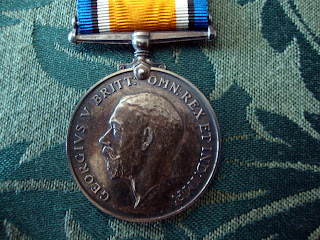 The British War Medal (Also know as the "Bread and Butter Medal" because of its silver content.  Many English veterans sold the medal during the Great Depression to buy food while they were out of work). 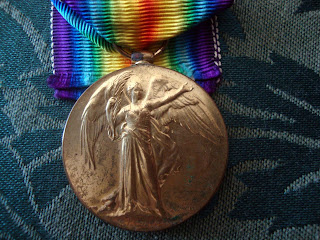 I talked with my mom and dad about this and they surprised me by producing my grandfather's medals.  They gave them to me, knowing how much that would mean and that I would treasure them. 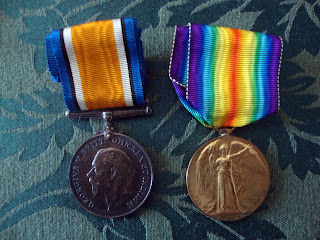 My grandfather survived the war without any physical wounds.  What I learned later was that the war never left him.

After my grandfather was demobilized and left the Army, he returned to the U.S. and became a citizen.  He met my grandmother and married and led a quiet life as a master cabinet maker.

Years later, after my grandmother had passed away, he came to live in our home.  He had his own room next to mine where he enjoyed the rest of his years peacefully watching baseball and smoking his collection of pipes.  He did, however suffer from bad dreams and often times would moan loudly in his sleep, unable to wake up.  I'd have to go in to his room and gently shake him until he awoke.  He'd thank me and then roll over and go back to sleep.  None of my family thought to much about this, but now I realize that he suffered from Post Traumatic Stress Disorder (PTSD) and never received any help for it.

I tracked down the MGC hat device that the soldiers wore on eBay.   Crossed machine guns under the English Royal Crown. 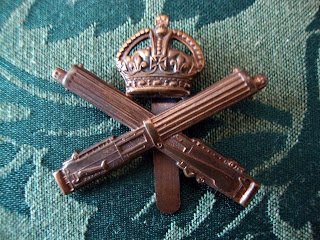 Now I have a shadow box to put everything in in a nice display to remember my grandfather, Private Oscar W. Measom, 121758, Machine Gun Corps, English Army.  My military roots go back to him and his service during a terrible time in the world. 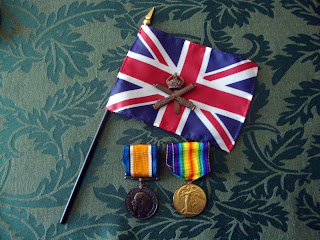 Posted by Paul and Marti Dahl at 2:08 PM