They don't know the trouble they're in.


Rain began to fall from the low, gray clouds that covered the tops of the Manhattan skyscrapers.  The wind picked up, causing choppy, white caps on the dark waters of the Hudson River.

I was at the helm of my Coast Guard 41 foot Utility Boat with my four man crew.  We had left Coast Guard Station New York a couple of hours before to patrol the rivers around New York Harbor. 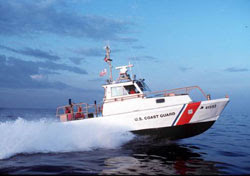 It had been an uneventful patrol, my crew just looked around at the sights, not seeing anything that would require our closer attention.

Then came the call across the radio that galvanized us into action.  The call that always sent chills down your spine:  "Boat capsized in the Hudson River off Pier 88, people in the water!"

I pushed the throttles to full ahead and spun the wheel, pointing the 41 up the Hudson River.  It was mid November 1986 and the water temperatures were very cold, reducing survival time of anyone floundering around to mere minutes.

I didn't have to pass any orders to my crew, we had trained so often for just this too often occasion that everyone automatically got the rescue gear ready.  One of my crewman pulled on a wet suit and a recovery harness.  He was my rescue swimmer.  If a person in the water was too cold or fatigued to help themselves, he would dive into the water after them, the recovery harness had a line clipped to it that we would use to haul him back to the boat once he grabbed on to the person.

Within minutes we arrived on scene, I throttled back the twin Cummins 903 diesel engines and maneuvered close to the capsized boat, an eighteen foot long sailboat.  It had turned completely upside down, the centerboard was sticking straight up in the air.

There were two people clinging to the boat.  One man was half out of the water, hanging on to part of the centerboard, the other man was holding on the the wooden rudder with a death grip, just his head and his arms above the waves.

I slowly slid the 41 alongside the sailboat and the hull touched my starboard side with a slight bump.  The man hanging on the centerboard reached out to my crewmen and was quickly pulled on board my boat.

The other man who held on the rudder refused to let go and started arguing with my crew.  I shut down the engines, left the wheel and went out to the well deck to talk to the man myself.

I was close enough to the man to reach out and shake his hand.  He was wearing rubber boots, a full, yellow rubber rain suit...and no life jacket.  He hugged the rudder like it was a long lost lover.

I had been fortunate to have attended the Coast Guard's prestigious National Search and Rescue School the previous year.  The students are taught all the intricacies of rescue operations.  Search patterns, drift rates, survival times are all studied to give victims of a maritime accident a greater chance of rescue.

One of the first things I learned was that boating victims don't know the trouble they are in.  They have no experience in a boating accident, they are not prepared to handle it, their pride or ego gets in the way and they refuse the helping hand that is reaching out to them.

I talked to the man, I tried to convince him to let us help him into my boat.  He refused.  I continued to talk to him, I told him he could come into my boat, we'd re-right his sailboat and take them all back to his marina.  He emphatically told me through his chattering teeth that he didn't need any help.

I reasoned with him a little longer. He slowly realized that I was right and he finally agreed to come aboard my boat. Just as I reached out my hand to grab his, a loud CRACK sounded and the wooden rudder he was holding on to snapped off.  Before I could grab him, he slipped under the water, pulled down from the surface by the weight of the water in his boots and rain suit.

Posted by Paul and Marti Dahl at 9:19 PM