We saw Corey and daughter-in-law Amanda off today and Marti put forth the suggestion that maybe we should hop in the Journey and just go somewhere.  It's scary how she can read my mind.

We got to the Journey and opened it up, getting ready to leave and we saw THEM! 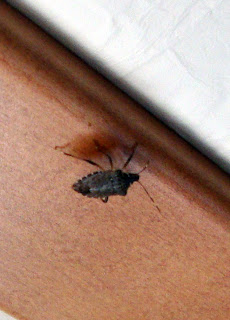 Stink Bugs!  Yuck!  It seems this year the Washington, DC area is infested with them.  If you squish them, they stink. ( Maybe this is the life form that DC politicians evolved from?)
They were inside the Journey and we spent several minutes chasing them down and quickly grabbing them in some tissues and doing away (flushing) them.  Finally we started down the road.
We thought we were rid of them, but they kept showing up, not inside the motor home, but outside, making loud splats sounds as they plastered themselves all over the windshield.  At least we were helping to control the population.
We stopped for lunch and the usual happened. 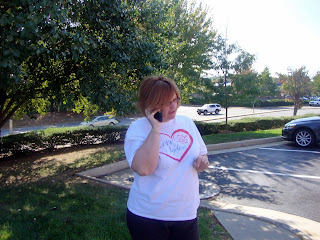 Marti spent time on the phone with her office, solving more of the never ending issues that come up whenever she's not there.  Ain't gonna' miss that.
We drove South and ended up at a KOA for the evening.  A mere $48.  No wonder we don't stay at them too often.  At least we had a nice, level pull through site. 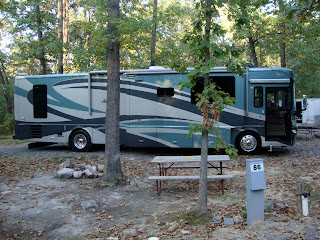 We didn't see any more stink bugs, maybe we got them all with the windshield.  But something still smelled stinky.  Zoe, to show how much she loves us gave us a special treat.  She rolled in a pile of doggie poop.
You know what had to come next. 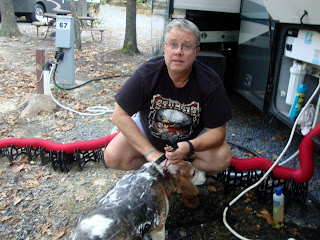 Why do I have to scrub the dog and Marti gets to take all the pictures?
Later, after Zoe was certified clean as a whistle, we went for a walk around the campground.  Marti made friends with an old timer at the KOA.  He didn't talk much. 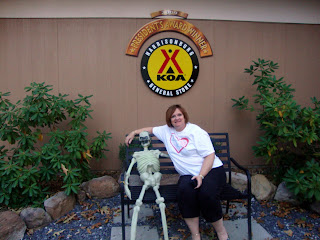 Here's hoping for a better smelling night.  Don't know how well that's going to work out, we had beans and franks for dinner...
Thanks for visiting and feel free to leave a comment.  Gas Mask not included. ;c)

Posted by Paul and Marti Dahl at 8:18 PM