We've discovered an new phenomenon in life as full time RVers.  We're losing track not only of time, but what day of the week is it.  To combat this loss of days of the week, we had to get this remedy: 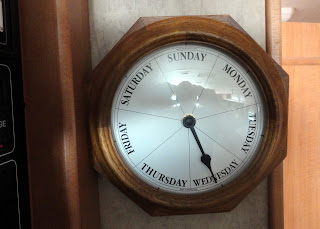 It actually works pretty well and has prevented us from showing up for a Sunday morning church service on Tuesday...
We took a trip to downtown San Diego and walked along the beautiful waterfront in the warm sun.  The sun felt so nice after all the cold weather we've experienced.  We were not the only ones enjoying the day, there were lots of people about, even kite flying.
We think they were kite flying, but it was so huge, it might have been a UFO coming in for a landing. 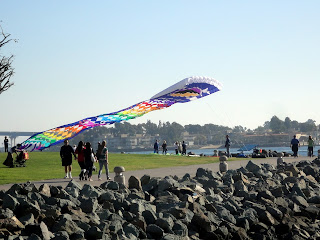 The waterfront has many lovely fountains and other enjoyable sights.  One statue is of a girl playing the violin while standing on a naked man.  In my efforts to keep this blog G rated, I cropped the photo so you wouldn't be afraid to show it to your mother. 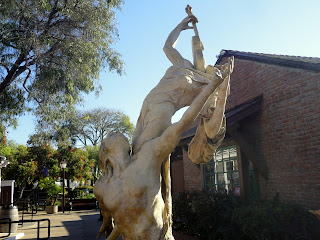 San Diego is a Navy town, no mistaking it.  It has a large base and even its own aircraft carrier museum, the USS MIDWAY, its deck covered in various types of aircraft.  There is even a statue of the famous picture of the sailor kissing the nurse that was taken on the announcement that Japan had surrendered and World War II was over. 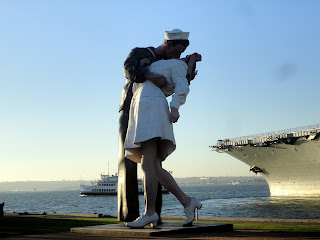 You can't miss this statue. 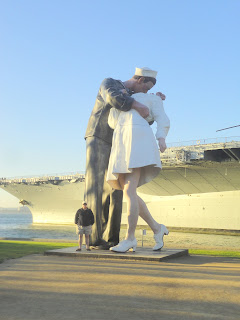 As a public service, I wanted to make sure this statue is safe for curious little boys to play around. 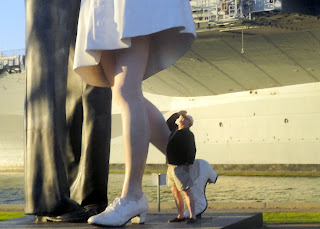 It is! ;c)
Next to the statue is a lovely tribute to Bob Hope, for all the years he entertained the troops overseas. 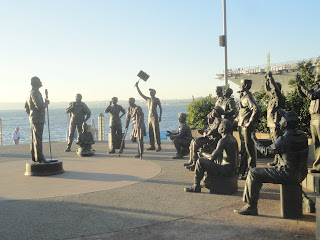 He was a wonderful supporter of the American GIs.  He put on shows starting in World War II and contiuned on through the many conflicts that followed.
I still miss him, truly a great American.
Thanks for visiting and feel free to leave a comment.