When Do You Stop Feeling Guilty?

After leaving the incredible beauty of the Oregon Coast, we headed inland for the weekend. 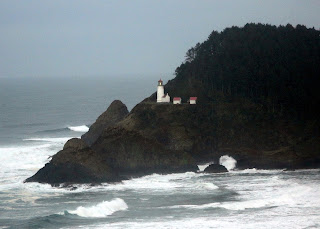 We've already paid for our Passport America membership with our second stay at a PPA participating campground.  For a  really nice, pull through FHU 50 amp site, we paid $19/night.  Coming from the East Coast where that money would barely get you a boondocking site, we're more than tickled.
With our plans to kick back and relax for the weekend, I decided I was going to sleep in until noon.  That didn't work out, I barely made it until 10, Marti was already up drinking her FAEL (Foul And Evil Liquid - aka coffee).  I had to get up, I felt like I was wasting the day.
It was nice to have no rush or any place to be, we enjoyed a nice cooked breakfast.  Lounging around after eating, we surfed the Internet, Marti played with her iPad and I read more of a great book I downloaded on Marti's Kindle.
Eventually, we did get dressed and we talked about how bizarre it felt to have this new lifestyle.  We wondered why it felt like we were on vacation and we should be "doing" something.
So, feeling like we were wasting the day, we walked around the park, then hopped in the car and drove around town a bit, looking at gas stations that carry diesel fuel and checking for the best price and easiest in/out access for the Journey.  We stumbled across a car wash, so the Element got a quick bath, it needed it.
Feeling a little more adventurous, we wandered around the area, just enjoying the scenery.  Lots of sheep farms, with some alpacas thrown in.  Along the way we came to this cute little covered bridge. 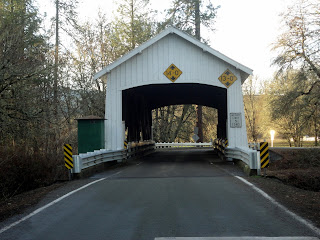 It was in great shape and we drove over it.  Another first for us, we never did that before.
After our tour, we returned to the campground and had dinner.  Sitting around again, we felt guilty that we should be doing something else, we were wasting the day.  Even though we know we're retired and time is our own, it felt, well, really weird!
Marti decided to work on some crafts, we have two new granddaughters on the way, so she started making baby blankets for them, with her new little sewing machine. 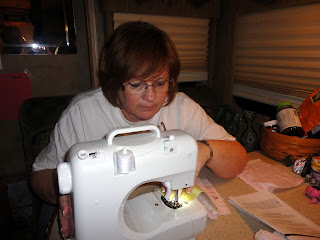 We'll get it right, it's going to take some time to get rid of the "guiltys".   Good thing time is on our side.  :c)
Thanks for visiting and feel free to leave a comment.