The Continuing Story of Iron Mike

First of all, I want to thank all of you folks that are visiting our blog and welcome all our followers, including our newest, Gin and Syl.  Secondly, I appreciate your patience as I take you on tours of museums and Civil War sites.  I'm a history buff and enjoy seeing history in person instead of from a book.  Marti's not, she brings a paperback or her Nintendo DS when I take her to these places.  I read many RV blogs and I'll let them do the birds and flower pictures. :c)

So on to Iron Mike and the National Museum of the Marine Corps.  One of the unique features in this museum is how they display their artifacts.  Many of the items are put in life size dioramas, with the mannequins in action poses, which helps to make you feel part of the action.

I start today in the World War II section, where the greatest generation defended freedom.

December 1941, after the attack on Pearl Harbor, the Japanese turned their military might to Wake Island, a tiny U.S owned island in the Pacific, west of Hawaii.  The Marine defenders turned away the first Japanese invasion attempt.  Here a Marine, using WWI equipment fights off Japanese planes.  A second invasion overwhelmed the tiny Marine garrison, who fought gallantly with no hope of reinforcement until it was futile to resist any further.  The surviving Marines went into captivity for over four long years. 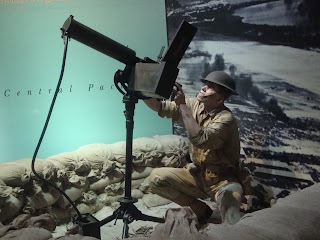 August 1942 saw the Marines land on the island of Guadalcanal, where the Japanese were constructing an airfield to support their plans for the invasion of Australia.  The Marines stopped the Japanese advance and after a fierce battle, turned the tide of the war in the Pacific.  Here a Marine ground controller guides in a Marine fighter plane from the "Cactus Air Force" to land at the former Japanese airfield.  The airfield was renamed Henderson Field in honor of Major Lofton Henderson, a Marine pilot lost at the battle of Midway. 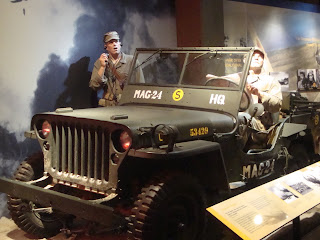 Marines used Stuart tanks like this one to fight on Guadalcanal.  Note the painting of a pinup girl on the side of the tank. 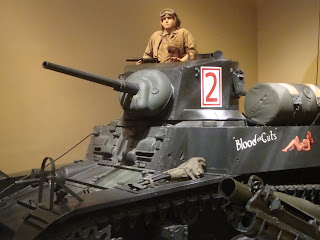 This tank has actual battle damage.  I wonder if it was from enemy fire or the wrath of a Marine tanker's girlfriend when she saw the pinup painting? ;c) 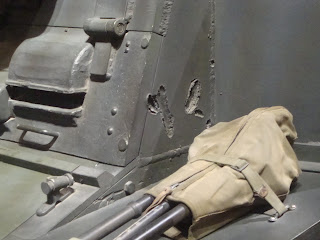 Later in the war saw the Marines using the M4 Sherman tank.  When it was first fielded, it was not heavily armored and quickly gained the horrible nickname of the "Ronson", named after a popular cigarette lighter of the day.  The tanks were easily set on fire by anti tank weapons.  Later versions, like this one, had additional armor plates welded to the sides.  A box at the rear of the tank had a telephone where Marine riflemen could talk to the tank crew. 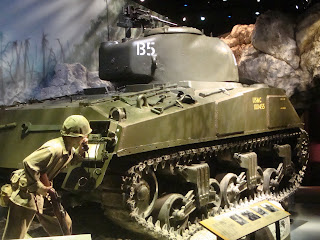 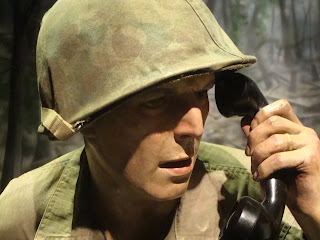 The most famous picture of World War II was the raising of the American Flag over Mount Suribachi on the island of Iwo Jima. 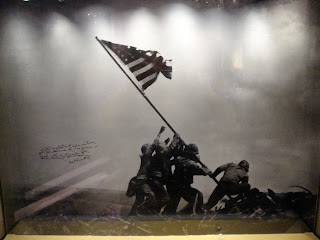 This is the actual flag that was raised over Iwo Jima.  It is a little ragged, because it flew for many days before it was lowered and preserved.  An amazing piece of Marine and American history! 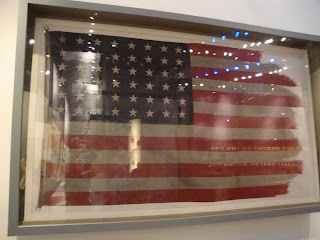 Women who served as Marines in WWII are also honored. 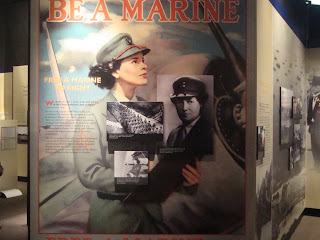 Tomorrow's post will cover Marines in the Korean and Vietnam Wars.  But before I go, here is a picture of Iron Mike.  His story tomorrow...I promise! 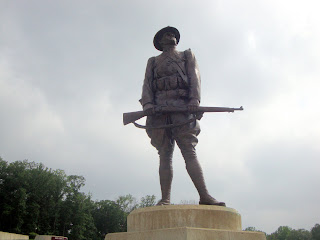 Posted by Paul and Marti Dahl at 9:40 PM