Everywhere we drive around our home in Northern VA, we see cars and SUV's with "OBX" bumper and window stickers.  "OBX" is the abbreviation for the Outer Banks of North Carolina, a chain of barrier islands off the North Carolina coast.

It is a favorite tourist destination, with miles of sandy beaches that during the off season you can drive your SUV on.  People are drawn to this destination like flies are drawn to, um, sugar.
Marti and I are always looking for a new adventure in our RV, so in late fall, we loaded the tadpoles into the Element toad, hooked it up behind the motorhome and headed out to see what OBX is all about.

We arrived and found a nice campground that bordered the ocean on one side and the bay on the other side, we could have our pick of nearly every site there.  We chose the bay side because it was less windy and we could watch nice sunsets over the bay. 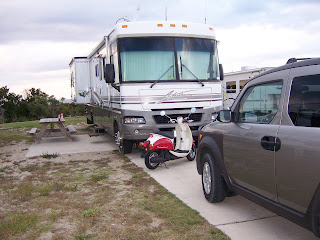 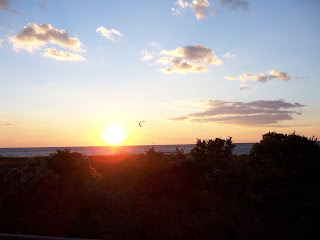 We explored up and down the main drag and ventured up to Kitty Hawk, where the Wright brothers launched the first powered airplane in history in 1903. 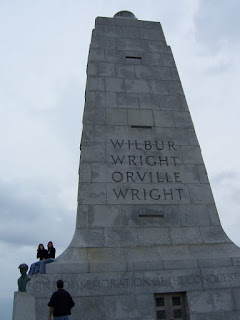 The museum at Kitty Hawk has a full size replica of the Wright Flyer. 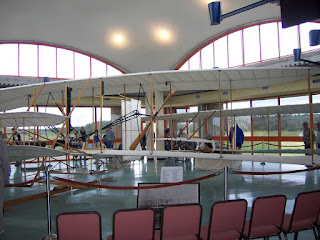 A Park Ranger gave a talk about the Wright brothers, their plane and the events that led up to the day when they became the first men to fly.  It was a fascinating presentation, it had about 15 minutes of information packed into 45 minutes.  Yes, the Ranger was impressed with himself.
We walked the grounds of Kitty Hawk and paced out the distance of the first flight.  It wasn't very far at all.  We read about how the Wright brothers chose the Kitty Hawk location and traveled there from their home and bicycle shop in Ohio.  Kitty Hawk had strong, steady winds that were necessary for flight.
The day we were there, a kite flying contest was being held.  It was comical, none of the kites got airborne no matter how hard their owners tried.  There was no wind!
The next day we explored some of the beaches with the Element.  It was a new experience for us, we've driven the desert, but not the sand.  The Element did just find, despite the soft sand.  I let air out of the tires, down to about 20 psi to give the tires a bigger footprint. 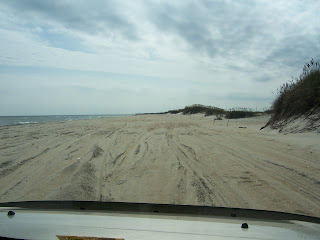 When we were done, I re-inflated the tires to the correct pressures with a portable air pump I carry. 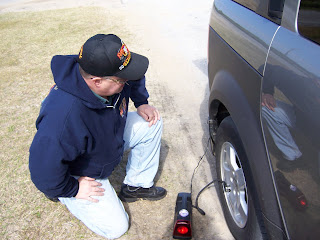 The last day, we drove down to the Cape Hatteras Lighthouse. 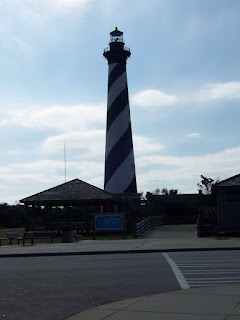 This light house has withstood hurricanes and all the inclement weather Mother Nature could through at it.  But it couldn't withstand the creeping erosion of the sea.  It was picked up and moved intact from its original location to a new place one quarter mile further inland.  The original site is marked by a ring of stones. 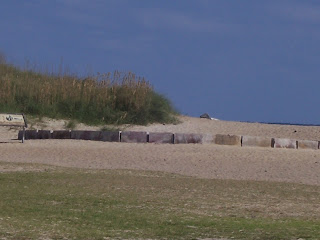 We discovered that OBX has alot to offer and can see why so many people enjoy coming to the area.  I also realized that even though I spent many years out on the ocean in sea going assignments, I missed being out there. 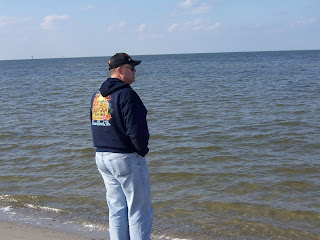 We browsed through many shops all along the Outer Banks.  And no, we didn't buy an "OBX" sticker.
Thanks for visiting and please feel free to leave a comment.

Posted by Paul and Marti Dahl at 9:41 PM