Back at the National Museum of the Marine Corps, the tour goes to the Korean War.  Here a Pershing Tank is involved in house to house fighting as the South Korean capitol city of Seoul is wrested from the invading North Korean army. 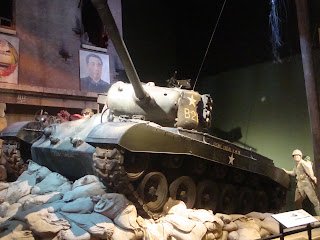 As you move along, you enter a room that is chilled way down.  All around you are Marines fighting the winter battle of the Chosin Reservoir. 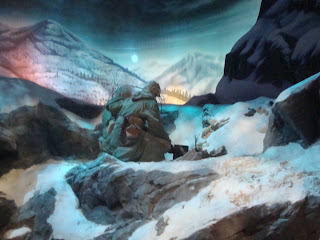 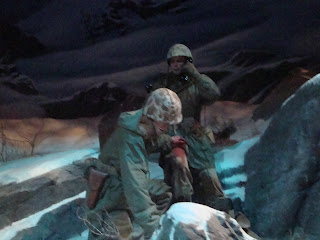 The stress of battle is on this Marine's face. 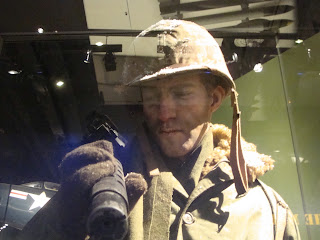 During the Viet Nam War, not all the fighting took place in the jungle.  The battle for Hue City found Marines fighting house to house supported by unusual vehicles. 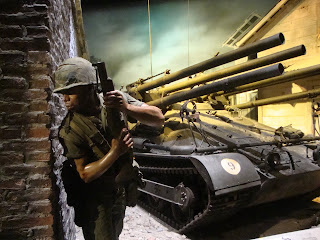 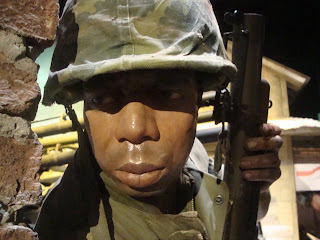 The Marines developed innovative ways to be inserted and picked up from the jungle in places where the tree growth was too dense for a helicopter to land. 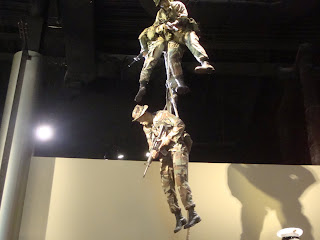 Despite all the training, tactics and cutting edge equipment, many Marines paid the ultimate price for our freedom.  Never forget their sacrifices. 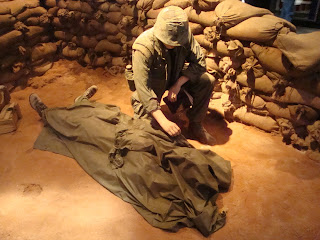 The tour goes on to the Gulf War, the Iraq and Afghanistan Wars and looks at the future of the Marine Corps.  I'll leave that for you to explore when you visit the National Museum of the Marine Corps.  As you get a chance to look at the exhibits, be sure to notice the many older men walking around the museum.  Many are frail, some with canes, some with wheelchairs, these are former Marines of the Greatest Generation.  Don't forget to say "Thank You". 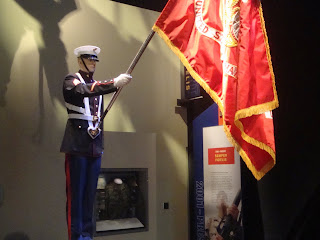 One final note, all the faces on the mannequins are patterned after real Marines that are serving today.
And now...the story of Iron Mike.
In the past, the U.S. Military had many inter-service "rivalries", some good, some bad, some absolutely ridiculous.  Iron Mike is a product of the latter.
After World War I concluded, U.S. Army General John "Black Jack" Pershing, the commander of all the American forces in France commissioned a bronze statue to built by famed French sculptor Charles Raphael Peyre.  The statue was to be of a U.S. Army soldier to honor the "Doughboys" that served.  Peyre did not know there was a difference between Soldiers and Marines and used a Marine as a model for his sculpture, and included the details of the Marine uniform right down the the Marine symbol of the Eagle, Globe and Anchor on the helmet. 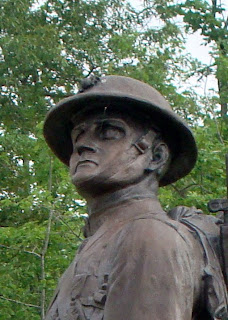 When Pershing saw the finished statue, he demanded the Marine symbol be removed from the helmet.  Peyre refused and Pershing declined to purchase the statue.
Enter Marine General Smedly Butler, who started a campaign to raise the funds to purchase the statue, which became to be known as "Iron Mike", a memorial to all the Marines who fought in WWI.  The purchase was completed and Iron Mike still to this day stands in front of the Marine Corps Training Command Headquarters in Quantico, VA. 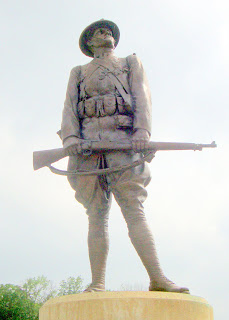 When the National Museum of the Marine Corps opened a copy of Iron Mike was made and put on display in front of the museum building, honoring all Marines. 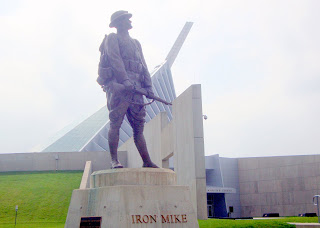 Posted by Paul and Marti Dahl at 4:02 PM