I must confess, I'm a D*** Yankee.  Born and raised in New Jersey.  Now I live in Virginia, courtesy of the Coast Guard.  I'm not complaining, however, because I've always been fascinated by the Civil War and my house is located right in the middle of where many battles were fought.

I've been neglectful in visiting many of the sites so I've decided to keep my eyes open for the unusual areas where Civil War History was made.  One of these little visited sites is the Stonewall Jackson Shrine, located just south of Fredericksburg, VA. 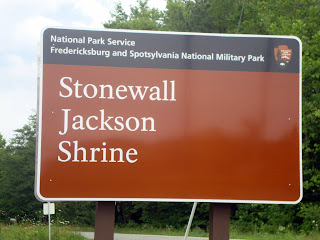 Thomas Jonathan Jackson was an 1846 graduate of West Point, and fought in the Mexican-American War as an artillery officer.  After that war, he resigned from the army and became a professor at the Virginia Military Institute, where he taught artillery tactics.  When the Civil War broke out, he left his teaching post and joined the Confederate Army. 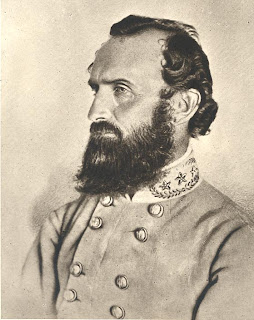 At the First Battle of Bull Run, in Manassas, VA, he commanded the Rebel artillery and turned back charge after charge by the Federal troops.  It was here he earned his nick-name, "Stonewall" because he stood like a stonewall in the face of the attacking enemy and repulsed them soundly.
Jackson became Confederate General Robert E. Lee's right hand, Lee relied on Jackson to carry out his orders, which Jackson did, brilliantly.
In May 1863, at Chancellorsville, VA, Jackson and his staff officers rode out from Confederate lines to do a reconnaissance of the battlefield for the next day's fighting.  Returning to the safety of his lines, Jackson was shot in the arm by one  of his own sentries, who mistook him for an enemy.  Jackson's arm was so badly wounded that it had to be amputated.  Jackson was taken to a nearby farmhouse at Guinea Station to recuperate.  Despite the successful amputation and the early recovery, Jackson contracted pneumonia and died six days later.
The Stonewall Jackson shrine is the preserved farmhouse maintained by the National Park Service. 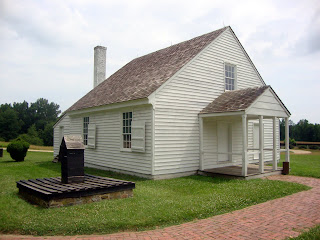 Out front of the farmhouse stands this marker. 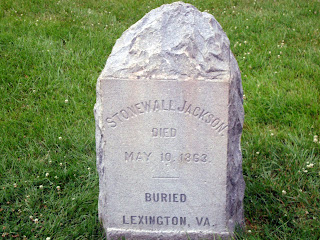 Inside the farmhouse is a special room.  All the furnishings are from the Civil War period.  Three of the pieces have historical value. 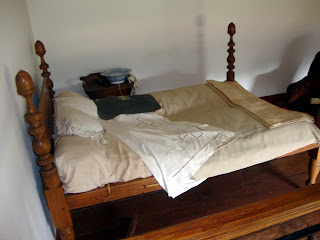 This is the actual bed were Jackson lay dying.  At the foot of the bed is a blanket that was used to cover Jackson's body.  One other piece of furniture in the room that was there when Jackson died is this: 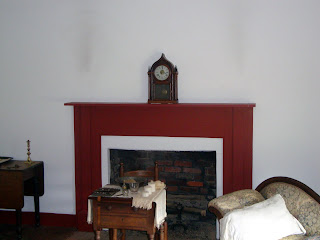 The clock on the mantle was in the room when Jackson died, with his wife and daughter by his side.  The bed, blanket and clock were preserved by the family that owned the farmhouse and were passed down from generation to generation.  The clock still works and ticked just as it did as Jackson's life wound down.
His body was taken to Lexington, VA where he was buried.  The South lost a brilliant general and his death contributed to the Confederate defeat.
I was amazed at the shrine, it was much more than I had expected.  There is no cost to visit and large RV's can park.  The Stonewall Jackson Shrine is located 5 miles east of Rt. 95 (Exit 118) and is clearly marked.
Thanks for visiting and please feel free to leave a comment.

Posted by Paul and Marti Dahl at 8:11 PM