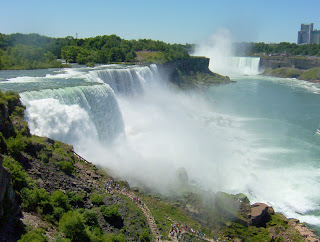 Actually, it was more like a little leak.  But it kept getting bigger and bigger.  And I had to fix it or never take another shower in the Journey.

A while back, I noticed the Journey's on board water pump would occasionally bump on for a second every hour or so.  At first I thought it was just the icemaker refilling, but that usually took two two second bumps of the water pump to fill it.  Didn't think too much about it.

Then in September, while camping at Branson, MO, I noticed a little damp spot under the hot water heater compartment.  Ah Ha, thought I, the pressure relief valve has dribbled a bit (which they sometimes can do) and dismissed it as the reason the water pump bumped on every once and a while.

Then, when I went to pick up the Journey from the Freightliner dealer after the engine valves were adjusted, I found a rather large puddle underneath the hot water heater compartment.  Not good, this deserved a serious look.

It was not my pressure relief valve, it was dry as a bone when I checked it.  Crawling underneath, I found a steady drip of water coming from the back side of the hot water heater compartment.  Uh oh.

Now that we're going to move into the Journey mid next week because all the furniture in the house will be gone in the estate sale (we hope!) I had to determine where the leak was.  I was lucky, in the infinite wisdom of the Winnebago engineering process, there was a small panel under the hot water heater compartment that I was able to remove to see where the leak was.

On the back of the hot water heater tank, there are two connections, with hoses allowing cold water in and hot water out.  The hoses are PEX plastic hoses and they screw into brass fittings on the tank.  One of the plastic hose connections had a tiny crack and that was where the leak was. 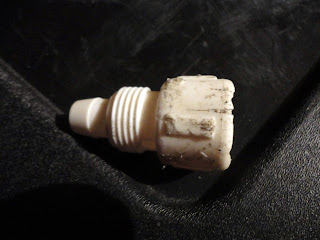 You can see the tiny crack on the large end right about in the middle.

Now the fun part, being able to reach the plastic connector.  Picture a saltine cracker box with one end open.  Looking inside, picture something the size of a strawberry at the other end.  Now picture yourself removing said strawberry with that much room.  I had to make it work, or I'd have to remove the entire hot water heater tank.  That would not be fun.

My first thought was to tighten the fitting, I could see it was scraped up right from the factory, there were teeth marks from a wrench on it.  Someone over tightened it when the Journey was being built and over the years vibration caused it to crack.  The next problem was to figure out how to get a tool on it to tighten it.

I have a collection of tools that I've purchased over the years.  They went to my son's house yesterday (sniff, sniff) to keep for me.  Fortunately I was able to grab a little pipe wrench I've had for over 25 years. 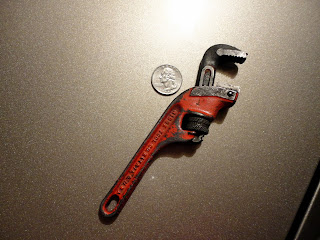 It fit in that little space and allowed me, millimeter by millimeter to tighten the fitting a bit.  Of course, that didn't work, it made the leak bigger.  So the only other option was to remove the fitting and get a new one.

Easier said than done.  Reverse turning, millimeter by, well, you get the idea and unhook the line from the brass fitting on the tank.  It took a while.  A long while.  And no four letter words were used in the process.  :c)

Once I unhooked it, I was able to pull the PEX line down far enough to remove the fitting.  And then off to Lowe's, my favorite store.  After multiple looks in the plumbing department and two Lowe's plumbing expert's assistance, it was determined that they did not have that fitting.  Uh oh.

Marti suggested I try an RV dealer about 20 minutes from our house that is pretty good with parts.  And more interestingly, they closed in 30 minutes.  We jumped back in the car, dashed down there and made it with 10 minutes to spare.  And, drum roll please...they had the fitting in stock!  $4.98.  Some days you win one for the Gipper, or in my case, the Journey.

Back home, installed the new fitting, millimeter by millimeter and it was Niagara Falls no more.

You can be sure that little pipe wrench will be with us as we travel full time.  As big as motor homes are, they sure have some tiny places to have to fix things.

I've said it before and I'll say it again, if you weren't handy with tools before you bought an RV, you will be after purchasing one.

Posted by Paul and Marti Dahl at 6:40 PM