Waiting for a perfect day to see more of the planes on display at the parade ground at Lackland Air Force Base, I didn't luck out.  Today, our last day here at the FamCamp, it was raining on and off, I braved the raindrops and ventured out to take pictures of the planes.

The parade ground is surrounded by planes organized by type.  One side is modern jet fighters, another, World War II (WWII) fighters, the third side is cargo aircraft and the last row is WWII bombers.

So, without too many words (I'm sure you appreciate that for a change) I'll put up pictures for you to: a.) Enjoy or b.) want to rush out for a manicure and a pedicure. 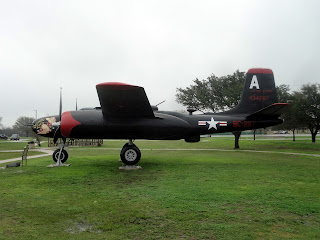 A-26 Invader, it was the longest serving light bomber in the Air Force, from 1943 through 1975.  It served in WWII, Korea and the Vietnam war. 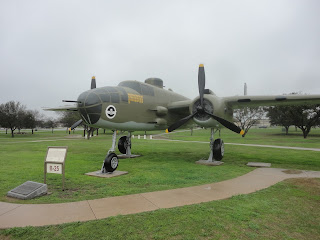 The B-25 Mitchell, a WWII light bomber.  This type of aircraft was the first to bomb Japan in WWII in the Doolittle Raid. 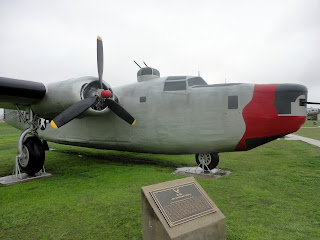 The B-24 Liberator.  It was the most produced bomber of WWII, over 18,000 were built.  There are only a few examples of this aircraft preserved in museums and one example is still flying with the Commemorative Air Force.  It was nice to see this plane honored. 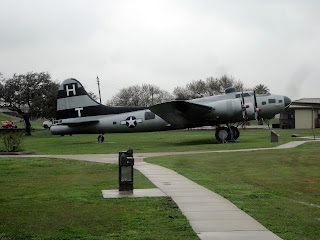 The B-17 Flying Fortress, probably the most famous U.S. bomber in WWII.  With over 12,000 B-17s built, there are actually about a dozen that are still flying today as well as another dozen in museums.  The reason there are so many flying with museum groups today is the B-17 had a peace time mission.  Many were purchased after the war and converted to fight forest fires as fire bombers, dropping retardant chemicals to fight the flames. 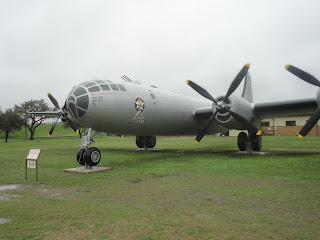 The B-29 Super Fortress.  Only about a half dozen of these planes remain today out of the 3,000 built, with one flying with the Commemorative Air Force.  This is a special plane for me, my dad flew and maintained these aircraft during WWII.
And one last picture, not of a bomber, but a "Gooney Bird." 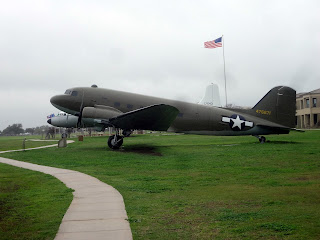 The C-47 Dakota.  It was used as a WWII cargo aircraft but saw combat while carrying paratroopers and towing gliders loaded with troops.  Designed in the 1930s, many of these aircraft are still flying today all over the world.  They are ruggedly constructed, able to carry heavy loads and land on short and unimproved runways.  Many will still be flying for years to come.  Amazing. And its nickname?  The Gooney Bird.
These planes are part of a history course for the new Airmen that are undergoing basic training on the base.  It is part of the heritage instruction for today's new Airmen to learn about and be inspired by those that served before them.
Thanks for visiting and feel free to leave a comment.