Today dawned cold and rainy, not that we saw the dawn, we were snoozing and dreaming.  When we did finally drag our lazy buns out of our nice, warm bed, we decided a cold, rainy day was not a good day to visit the San Antonio Riverwalk.  We may be retired and lazy, but we're not stupid...

Actually, this was the first rain soaked day we've had since leaving Oregon.  We can't complain, so alternate plans were set in motion.  Marti went to the base exchange and got her hair cut and a pedicure.  Me?  I stayed home in the Journey and watched The Magnificent Seven on a DVD.  Seems I've been craving westerns since we visited Old Tucson Movie Studios.

Late this afternoon, the skies cleared and the sun came out and started warming things up.  Looking over the Journey, it still is just as dirty as before.  The rain didn't remove any grime at all.  How come water can carve canyons, erode mountains to plains but can't remove a coating of dust from our motorhome?  Somethings wrong somewhere...

One really nice thing that Lackland AFB has (besides causing flashbacks from many of our blogging friends recalling going through basic training here when they joined the Air Force) is a parade ground surrounded bunches of famous aircraft.  Yep, history!  I'm in my element.  And best of all, these "birds" stayed still for me to photograph.  ;c) 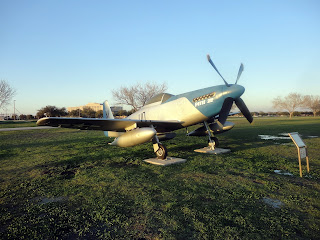 The P-51 Mustang, probably the best fighter of WWII. 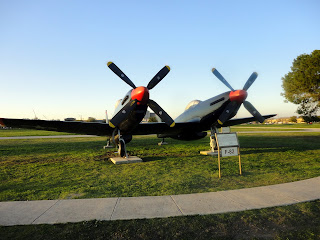 If one P-51 is good, joining two together is better, the F-82.  This is a really rare aircraft, considering only 283 were built, to see one example live and in person was quite something. 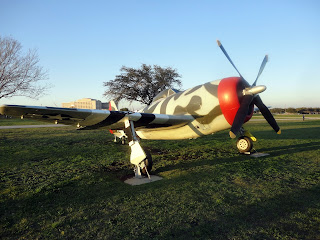 The P-47 Thunderbolt, affectionately known by its pilots as the "Jug".  A big, heavy aircraft that was able to withstand all kinds of damage and still bring its pilot home safely. 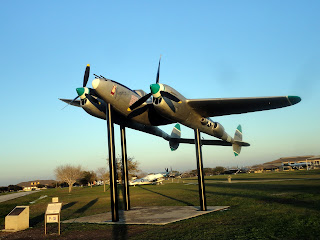 The P-38 Lightning, called the "Fork Tailed Devil" by Japanese pilots that fought against it (those that survived).
There are other famous aircraft around the parade ground, but they'll have to wait for another day.  Tomorrow looks good for the Riverwalk and the Alamo.  The sun is supposed to be shining and the temperature should be lovely.  Maybe we can get outta' bed before the crack of noon.
One last picture, some folks in the campground, I guess they like Volkswagons.  Hopefully, the blue tarp kept them dry during last night's rain. 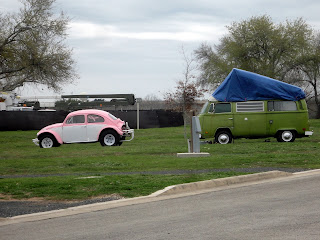