Last night as we were slowly winding down and just about to head to bed with heavy eyes, we got a second wind, courtesy of the U.S. Air Force.

About a dozen of the heavy cargo aircraft that are stationed here went roaring right over our heads, shaking the Journey's windows and the fillings in my teeth.  Evidently the runway they used went right over the FamCamp.  They flew so low I was afraid to look at the roof this morning, I was sure I'd find tire marks from a C-5 Galaxy airplane.  Just another bonus staying on military bases, you get to see air power...up close and personal.  :c)

With sunny skies and warm temperatures, we headed in to downtown San Antonio to see the Riverwalk and the Alamo.  The Riverwalk was just as beautiful as I remembered it (I was here for a conference about five or six years ago).  Marti was enthralled with all the beauty. 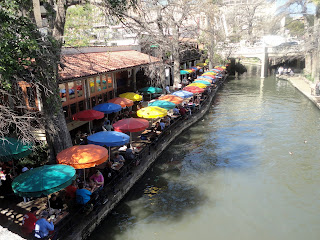 Plying the waters are these tour boats, decorated with...what else?  Yellow Texas Roses. 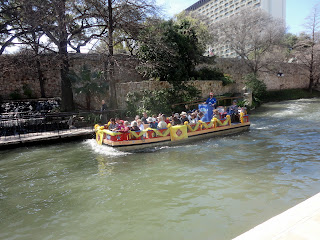 We took a ride on one of the boats, they go all around the Riverwalk and you get a good idea of the area and sights. 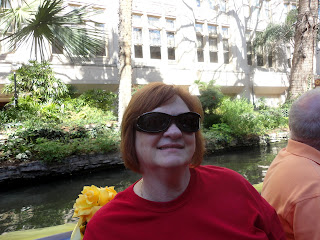 Some of the bridges are really low, no standing up in the boat. 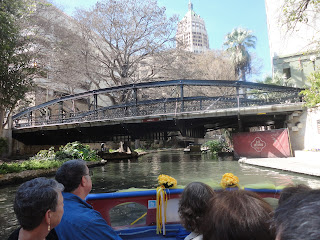 We ate lunch at one of the many restaurants along the Riverwalk, under one of the brightly colored umbrellas.  This eatery uses a unique way of cleaning the tables after patrons have finished their meals. 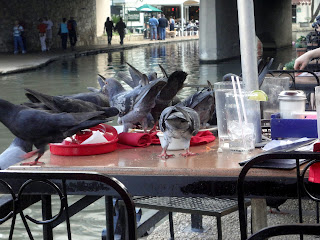 We walked a couple of blocks over to the Alamo.  You can't take any pictures inside the grounds, Texans view the Alamo as hallowed ground.  In 1836, 136 Texas patriots fought for Texas Independence against over 6000 Mexican soldiers.  The Texans held off the Mexicans for a number of days but were eventually overwhelmed and wiped out to the last man.  The story doesn't end there though, because within weeks, other Texans defeated the Mexican army at the nearby battle of San Jacinto, winning Independence.  The Alamo's defenders didn't die in vain. 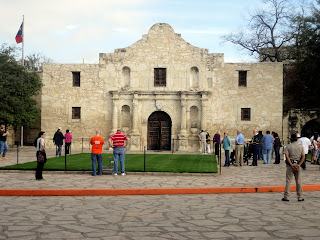 A very moving site, well worth the visit.
Thanks for visiting and feel free to leave a comment.