Running In The Desert

We're always looking for new experiences in our fulltime travels.  We've heard time and again that one of the best burgers a person can get is an In-n-Out burger.  There was one nearby so we decided it would be a great place to eat lunch and try out this delicacy. 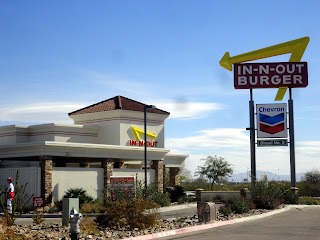 The place was mobbed, standing in line almost forever, we knew we were in for a special treat.  Little did we know what kind of a treat it was going to turn out to be.
After several lifetimes of waiting, our burgers were served.  We sat down, hands shaking in anticipation and chomped down.  Huh?
The burgers didn't taste very good at all, in fact, they were pretty disappointing.  White Castle makes tastier burgers.  Since we had already paid for the burgers and had a couple of places we were going to today, we just choked them down and headed out.  We thought the burgers were pretty forgettable.  How wrong we were.
We drove to the Arizona-Sonora Desert Museum, a highly rated "must see" in this area.  We've fallen in love with the Arizona desert and want to learn as much about it as possible. 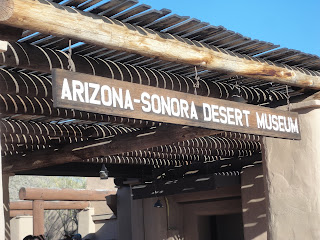 The museum is excellent with fascinating exhibits.  Along with the reptiles (there's lots of kinds of snakes in the desert...Marti passed on that exhibit), we visited a prairie dog village, 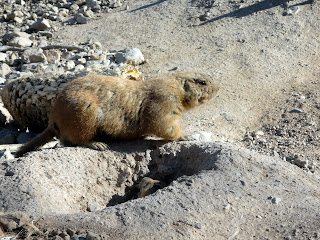 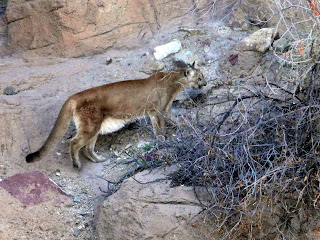 even a bat cave! 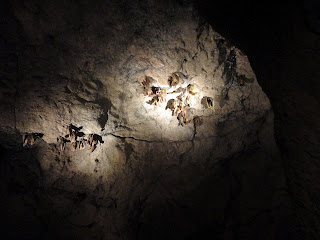 The Desert Museum's exhibits are spread out along a two mile trail.  The facilities are back at the entrance.  This is where the day got really interesting.  The In-n-Out burgers attacked.  As in no longer wanting "In".  In fact, the "Out" became an urgent out, as in Turkey Trot out.  Of course, the alarm bells went off at the farthest end of the two mile trail. :cO
We try to get exercise every day, some long walks, hikes, bike riding.  Today, it was power walking, actually power running.  People jumped back off the trail as first I came steaming through, then, a little later, Marti.  I bet they thought the mountain lion had gotten loose.
Happily, we both made it in time.  For me, because I erroneously ordered a double In-n-Out burger, I made it in time, several times.
Never a dull moment for us, but rest assured we'll never darken the doors of another In-n-Out burger joint.
Once we had regained our composure, we started again our tour of the exhibits, staying much closer to the front of the museum, just in case.  There were lots of cactus for Marti to enjoy. 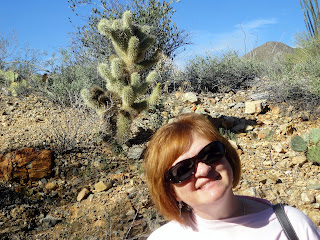 When we finished the museum, we had to drive the roads in Saguaro National Park. 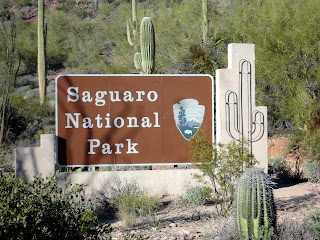 There is a $10 entry fee.  With a debit card, I hardly ever carry much cash.  The visitor center was unmanned and it has an honor system ticket booth, where you take an envelope, put in your money and deposit it in a lock box, then taking a tear off portion of the envelope as your pass.
Opening my wallet, I had nine dollars.  Scrounging around in all my pockets, I came up with enough change to make up that last dollar.  Hopefully, they don't mind 15 pennies.  If they do, we're already long gone.  ;c)
Off in the distance we could see huge groups of solar panels, each group larger than several football fields put together.  With the high temps here in the summer and the huge demand for electricity, solar energy is a good renewable resource.  After all, it seems like the sun shines here every day, and this is the winter.  (Do you think they'd notice if a couple of panels came up missing?) 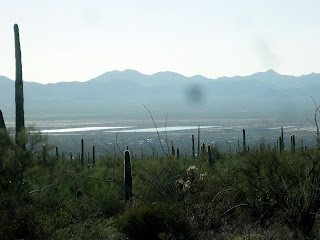 The cactus were beautiful and many of them were waving hello to us.  We even saw one that seemed to have been influenced by Disney. 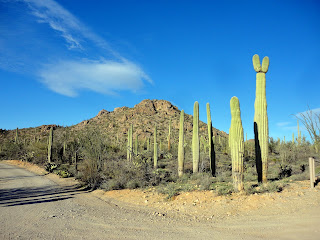 A coyote walked across the road in front of us, and we were so thrilled to see it, we never thought to take a picture until it was well into the bushes on the other side of the road.  Oops!
We really (really) like Tucson, it could be high on our list of a place to settle down again someday, if it wasn't so far away from our kids.  Maybe a winter lot...?
Before we make any choices like that, we've got a whole lot of the U. S. to see, so stay with us as we roll along.
Thanks for visiting and feel free to leave a comment.