Arguing Down The Highway

We departed the Dreamcatcher RV Park this morning to a cool, sunny day.  Being that it was 45 degrees (Fahrenheit, not Celsius, I can never think in those terms, it's too hard to unlearn Fahrenheit) I was dressed in my usual shorts.  People that know me know I love shorts and T shirts and wear them as much as possible.  40 degrees is my cut off and then the long pants are pulled out.  But I digress.

The goal today was Alamogordo, NM and the military campground on Holloman AFB.  We had two goals, get a site so we could tour White Sands NP and meet Kevin and Sheryl who are more of our "Old New Friends", friends we have gotten to know well from our respective blogs, but we have never met in person.

After a couple of hours of driving, we arrived at the base and went looking for the campground.  That's when the arguing started in earnest.  Not between Marti and me, but between our two GPS units we have in the Journey, a 7 inch GPS mounted on the dash where I can see it and a smaller GPS unit stuck on the window next to Marti's right shoulder so she can navigate us on our travels.

Evidently the AFB has competed a major reconstruction of its roads and none of the work was in either GPS's database.  They argued with each other, "turn right" when there was no road and the old "make a legal U turn" kept coming out of their little speakers, one in a male voice and the other in a woman's voice. You'd have thought they were married or something.  :cO

We have a Military Campground Book, the most recent one out there, printed in 2008, it didn't match anything close to what the GPSs were telling us.

Finally, the manly man that I am, (being in touch with my feminine side), I stopped, got out of the Journey and went over to a bunch of Airmen and asked directions to the campground.

You'd have thought it was a Republican Presidential Candidate debate, none of them agreed with each other and with much finger pointing and turn by turn directions, I left with their "guidance".  Carefully following their every word, we ended up at the RV storage lot.  Close, but no cigar.

Driving around some more, expecting to be pulled over by security police for our suspicious behavior, we found the base exchange.  Marti took a turn and went in with a pen and paper.  Several minutes later, she came out with directions to the building that housed the office of Outdoor Recreation.  Getting warmer.

Finding the Outdoor Rec building, Marti got the directions to the campground, the real one this time, and away we went.

Alas, there was no room in the inn.  Actually all the sites were full, but we were welcome to camp in their overflow lot for a princely sum of $3/night.  Cool beans.  We set up and shortly afterwards had a visitor, Kevin, our blogging friend we were hoping to meet, who is staying here at the FamCamp. 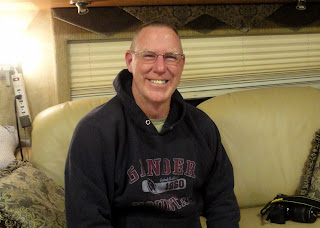 He's a super guy and we had a terrific visit.  It felt like we were talking to an old friend.  Unfortunately his wife, Sheryl is under the weather and was home in their trailer in bed.  We'll meet her next time we cross paths.

Even though we didn't get a site, the overflow is fine and meeting Kevin was certainly the highlight of the day.  Tomorrow, we're going to head out, drive through White Sands NP in the Journey, then turn in the direction of San Antonio, TX.  The Riverwalk and the Alamo beckon.

Hopefully we can get off the base with a little less arguing from the GPS units!  ;c)

Lastly, a note: Our blog counter just rolled over 100,000 hits.  We never thought that there would be that many visits from folks following along as we travel to see what kind of trouble we get ourselves into next.  Thanks to all for reading and following our new full time life!

Someday, we may be coming to a campground near you...  ;c)