Nothing exciting or earth shattering, just a four hour wrestling match with my 1989 Jeep Comanche pickup truck.  Now I know how Al from the "Bayfield Bunch" feels after his wrestling with his Jeep's convertable top. 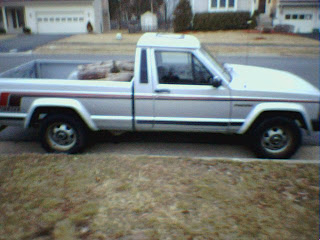 I bought it years ago when my youngest son was in high school and it would cover two bases, a vehicle for him and a truck for those around-the-house chores that are perfectly fitted for it's hauling bed.
The alternator bearing went bad.  I can't complain, it was the original unit and with 21 years of age and 145,000 miles, I got my moneys worth.
And because of its age, that is where the fun began.  The bolt holding the alternator to its bracket was rusted in place, which required me to cut it off with my Dremel tool (aka - lifesaver).  I took the aluminum bracket off and went to the Jeep dealer to get a new one because the remains of the bolt were still in it and would be a lot of trouble to drill out and re-tap.
Guess what, the bracket is no longer made.  The Jeep started laughing at me.  I scared it straight, I put a "For Sale" sign in the window.  It stopped laughing. 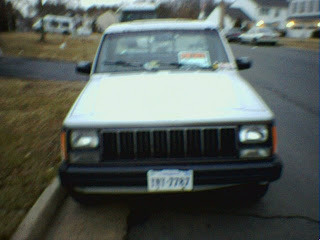 So I thought, where could I get another bracket?  That's when E-Bay came to the rescue...almost.

Everyone said they had the bracket.  After two incorrect purchases, I discovered nobody did.  On to Plan B.
Plan B was to take the original bracket to a machine shop and have the errant bolt remains drilled out.  I don't know if it's the economy or owning  machine shop is so lucrative that the two in my area were never open.  I continued looking and  finally found a little old machine shop run by a little old man with two ankle biting dogs.  He was sure he could get the bolt out and told me to come back in a week.
A week later, after my ankle bites had healed, I went back and the little old man had succeeded and removed the bolt without damaging the threads.  Cool.  And he only charged $50 for the work.  In this day and age, that's a deal, I was so happy I didn't fight off the yappy dogs as I ran their gauntlet on the way out.
So all I had to do was get a replacement bolt.  Guess what, nobody had one, not Lowe's, not Home Depot, not Tractor Supply, not even the Jeep dealer.  On a whim, I stopped into an RV dealer that has many hard to find parts and score!  A mere $1.60 and I was on my way.
Now I was laughing, I had already purchased the alternator, so I figured in an hour the Jeep would be up and running.  I came home and it was chuckling at me again, honest.  So in went the "For Sale" sign again, it quieted down. 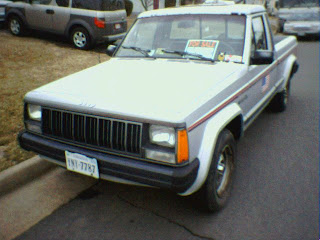 In went the bracket, in went the alternator, and then the wrestling match hit high speed.  The serpentine belt would not go on, the adjuster was rusty.  No more fooling around.  Out came the WD-40 and the air tools.
I won.  The Jeep started right up and ran well, I took a spin around the block and parked it.  Now maybe we can get rid of some of the stuff that's accumulated around the house.  It's always nice to have the last laugh. ;c)
Thanks for visiting and please feel free to leave a comment.

PS:  Sorry for the fuzzy pictures, they were taken with a Palm Pilot.  I need to stick to a camera!
Posted by Paul and Marti Dahl at 8:41 PM