I'm sure many of us have fuzzy images of the Revolutionary War, George Washington crossing the Delaware River, bundled soldiers dressed in ragged uniforms shivering at Valley Forge, or even the statue of the Minute Man up in that far away land called Massachusetts where the "Shot Heard 'Round the World" was fired.

So, how many can remember where it all ended?  The Revolutionary War ended with the victory at Yorktown, Virginia and the battlefield is preserved as a National Park.  I drive through the battlefield every day on my commute to work.  In my mind's eye, I can see the soldiers, British, French and American who struggled over the now quiet fields.

I thought I'd share some of the views and later tell how history repeated itself.

Yorktown, VA is located on a peninsula of land between the York and James rivers.   In October 1781, the British were pushed back to the tiny town by a combined American and French army commanded by George Washington.  The only way of escape for the British Army was by ship down the York river  and out to sea, but the French Navy blockaded the British fleet and trapped the British Army.  Washington laid on a siege and eventually forced the British to surrender after tightening the noose and bombarding them day and night. 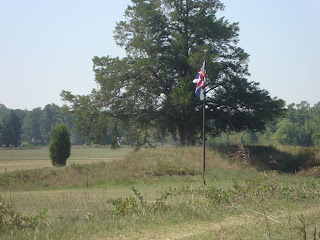 A British cannon looks towards the American lines. 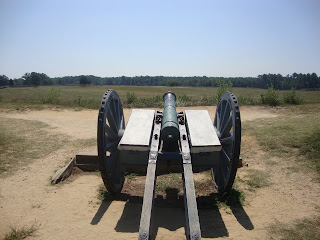 This British fortification, called a Redoubt was stormed in the dead of night by a young American Colonel named Alexander Hamilton. 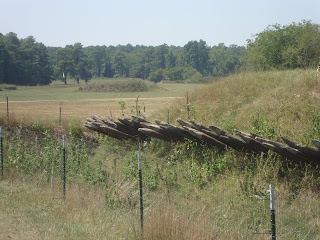 By capturing this outpost, Washington was able to bring heavy motors in closer to the British and hit them with greater accuracy. 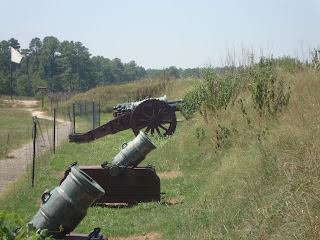 The British General, Lord Cornwallis, finally realized further resistance was futile.  A drummer boy was sent to the top of the British fortifications, and sounded his drum.  Then a British officer carrying a white flag appeared alongside the boy and was led to the American lines to discuss surrender.
This little white house, owned by the Moore family was were the terms of surrender were finalized. 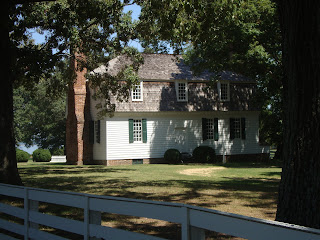 When the surrender terms were agreed upon, the British Army marched to this field, called Surrender Field and dropped all their weapons.  Liberty became reality on October 19th, 1781 here in this field. 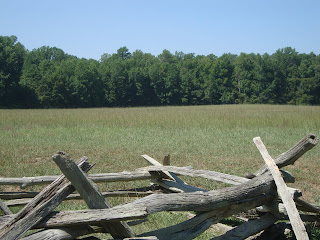 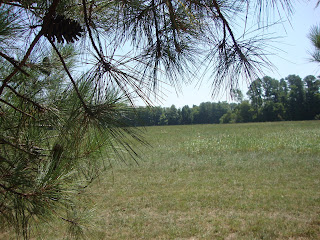 More tomorrow from Yorktown National Park.
Thanks for visiting and please feel free to leave a comment.