We've done it!  We got away for the weekend, scratches down the side of the Journey and all.  We are not gonna' let the scratches ruin our fun.  I think we've set a new record, too.  Marti has not had to go in to her office (keeping fingers crossed) at all.  She actually has had a chance to relax.

We're at our favorite campground, Bull Run Regional Park in Centreville, VA and have even lucked out and got the corner site we like. 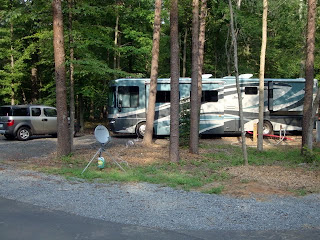 As you can see, there are a LOT of trees so we have the portable dish set up.  We do enjoy a chance to sit back and watch some TV, we don't always get that chance during the week.  We also picked up a couple of new items, a Sony camera for Marti to replace her Kodak Easy Share that died and a Cradle Point router.  Marti, my on staff Geek, was able to hook up our air card to it and now we're both on line at the same time. Cool!  Ain't technology grand?
While we were out on a walk with Zoe, the Wonder Dog, we had some entertainment with some folks towing a 30 foot long travel trailer with a half ton pickup truck.  It was obvious they were new to the RV scene.  The driver tried to get into a couple of sites and had trouble backing up.  He almost hit a tree and an electrical post, despite the screaming of his wife to stop.
They finally got into another site and as the guy was jockeying the trailer there was a loud BAM!  We wondered what that was from because we could see he didn't hit anything.  We walked over to see if they needed some help and saw that the trailer had popped off the ball and mangled the back bumper of the pickup.  The guy did not have a tow hitch on his truck, he stuck the ball through a hole on the bumper, designed for light weight towing, not a big trailer.
We commiserated with the guy and recommended where he could get a heavy duty hitch installed on the frame.  He said he couldn't understand why the trailer came off the ball, the guy he bought the trailer from said it would work just fine.  Yea, and the check is in the mail.
We felt bad for him, and continued on our walk.  When we came back, they had left the campground.  I hope they made it safely to where ever they were going.  It is a shame that the seller of the trailer was more interested in selling the trailer and didn't advise the guy that he needed a better hitch.
So we're kicked back and enjoying each other's company.  I have some more interesting stuff for tomorrow's post, so stay tuned.  Yep, I'm lazy... ;c)
Thanks for visiting and please feel free to leave a comment.